Yesterday I was an exhibitor at a retro computer fair in Västerås, Sweden.
I was offered a table for free so I tried to persuade more people to spend time and money on our favourite computers ZX80 and ZX81.

Most exhibitors were selling stuff, and some were just showing off their pets. About 300 persons paid to enter the fair, which is quite good considering the schools are on winter vacation and salary payouts are due next week. Not the perfect weekend of choice

Despite this I saw lots of stuff change owners, with many smiling purchasers carrying too heavy things in their arms. Prices were varying, with some real bargains and some very high prices as well. Quite a lot of really nice and unusual HW and SW was available, the breadth was much more than I expected. I even had to search the net for some things I'd never seen before!

My mission was to engage and talk to people about what HW-mods are DIY-possible, what new HW is available to purchase online, what new/old SW is available and what programming can be done on the Zeddy. There were some raised eyebrows about the capabilities of the ZX81

There usually comes an image report from the organizers after a while, so I'll link to that later. For now I'll insert a picture of my table. 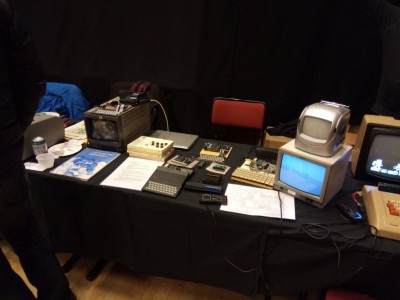 Yes Sweden I thought. Maybe I should attend a year. Swedish is like second langauge to me, coming from Denmark. But Vesterås is 870 km from here.

I shall go to Mahlerts in Germany for the ZX gathering, it’s only 650 km. The German language is very difficult for me though.
Martin
ZX81, Lambda 8300, Commodore 64, Mac G4 Cube
Top

I hope there was someone interested in these all retro stuff what you had.
Claudius
----------
Top

Martin: I will make sure to announce it beforehand next time, so others have more time to prepare.
It sounds like you are better at Swedish than I am at Danish. I try to watch Bonderoeven untexted but it is hard

McKlaud: I had good discussions with enough people to warrant the preparations I did.
/Adam
Top

I grew up on Bornholm and watched SVT1 and SVT2 back when there was only 1 Danish TV channel. I saw "Fem myror är mera end fyra elefanter"

I remember watching Norwegian TV when they only had one channel and it was only on in the morning and the evening. I feel old!!!
Top
Post Reply
7 posts • Page 1 of 1