Did 3D monster maze have it's beginnings here?

Did 3D monster maze have it's beginnings here?

On page 14 of the PDF is a simple maze game in Tiny BASIC and although it's minus the fabled monster the maze does look very familiar and appeared two years before 3D monster maze was released.

Or are the algorithms used common ones? I only ask as my knowledge of these things is nil.

I don't think so.

A lot of coders made 3D mazes without knowing this article.
I myself made multiple 3D mazes. Besides that, the shown screens are not how 3D monster maze is generated.
3DMM has al least always 2 steps to the next passage,
Top

It is 'Labyrinth' by Don Scales, later a famous Commodore 64 program, but of course this article is 1980 January before the 64

Could say the presentation looks simple compared to later programs, but the code seems fairly sophisticated. And at the time people were impressed. It was apparently designed for character graphics (text display) and a Commodore PET version was made

And seeing how it was published before a lot of people did similar things, it might have been where it all started? I wonder if the ZX81 'Labyrinth' is a port of this to machine language -- or just inspired by the idea

A-MAZE YOURSELF IN 3D
LABYRINTH


Don Scales
Lose yourself in this amazing game

Labyrinth is a fairly large program written in Tiny BASIC. Each time the program is run it will construct a different two dimensional maze and then allow the player to explore a three dimensional projection of this maze.

Here is the complete article text including the BASIC program

I'm getting better at typing since i had a stroke in 2015. I was able to type this up in an afternoon. Come to think of it, it's the longest type-in I have ever attempted. Back in the day i was more interesting in writing my own programs. Having the keyboard centered makes a big difference in touch typing (drat those HP laptops with a non-centered keyboard, but my HP Stream keyboard isn't too bad)

Pity it doesn't run on the ZX81. The Labyrinth program is written in TinyBASIC, so it has a few differences compared to ZX81 BASIC or the ubiquitous MS-BASIC. For example, the pound symbol # is used for not-equal, and the commercial at symbol @ used for the only string array. Having never used TinyBASIC before, I had to search for what these strange character usage meant. Although I finally got it modified for ZX81, the biggest problem is proving to be the array, which is apparently a 0-based array in TinyBASIC but 1-based in Sinclair BASIC. This leads to many Error Report 3 (Subscript out of range), so it doesn't ever get to drawing the actual maze

Don Scales
Lose yourself in this amazing game

Labyrinth is a fairly large program written in Tiny BASIC. Each time the program is run it will construct a different two dimensional maze and then allow the player to explore a three dimensional projection of this maze.

The program is divided roughly into two halves. The first half randomly builds a maze with a single route through it. A 2D plot of the maze is available at the end of this stage for those who suffer from claustrophobia. The second half of the program produces 3D projections as the player wanders along the corridors of the maze.

Building The Maze
The basic maze is a 'simple connected' maze (one which has no closed circuits). It is constructed using two, two dimensional arrays. The first array holds an indication of which cells of the maze have been used and the order in which they have been allocated. The second array holds the description of the topology of the maze.

The maze construction starts by randomly selecting an entrance along the width of the maze. This location is saved in a spare element of the array.

Consider the following examples. In each of these four there are three possible choices, A, B and C

hence the route can be chosen from the three possibilities.
Next there are six combinations of two choices.

To arrive at these choices, the program must first scan the adjacent cells. As the program knows the direction it has just come from, it only needs to check the other three directions.

The program continues its random route through the

At this point, the player can obtain a two dimensional display of the maze. Each element of the second array contains information about one cell of the maze. This information is incomplete as it is only for the top and right hand wall.

The Third Dimension
To produce a three dimensional picture, it is necessary to complete the cell information and organize it in such a manner that it can be rotated. The binary system fulfils both these requirements. A bit is used to indicate a wall. So we get

The information for the 2d maze is therefore translated and the information completed by inspecting the neighbouring cells. The 3D pictures are produced using memory mapping and the graphics available on the TRITON. As most systems have both memory mapped displays and graphic symbols, it should be very easy to convert this part of the program to run on most machines.

The display is constructed simply with horizontal, vertical and diagonal lines. A reasonable display would be possible with | — and / \ To move in the maze, the player can turn left or right or move forward. The players current position can also be obtained.

Giving The Picture
To produce the 3D picture, the program starts with the cell corresponding to the players current position. This cell is then rotated, as described earlier, until facing the same way as the player. The program then decodes the cell information and checks for the walls left, right and in front of the player. At the first depth, either a blank wall or two columns are produced. If a blank wall is produced, no further information is available. If looking out of the maze, no further information is produced and if outside the maze and looking away from it, a blank screen is all you get.

If, on the other hand, a passage exists to the next cell, the program obtains the information about the next cell by making the appropriate index and rotates and decodes this cell. At the second depth, it is possible to have walls or passages to the left, right and straight ahead.

Each depth has its own display routine which checks

for and plots the three walls or passages. Each depth produces a display continuing from the previous and maintains the perspective. The display stops either with a blank wall or when depth 5 has been reached.

The program listing following contains the full Tiny BASIC commands and is commented to make it easier to follow and to translate. If using a floating point BASIC, take great care in the rotate and decode routines as they rely on integer rounding effects. A large number of INT commands will be required.

The program will fit on a TRITON with mother board and an extra 8K of static RAM but the Tiny BASIC commands should be abbreviated for size and speed reasons. A tape of the program in abbreviated Tiny BASIC is available from TRANSAM of Chapel Street, London. 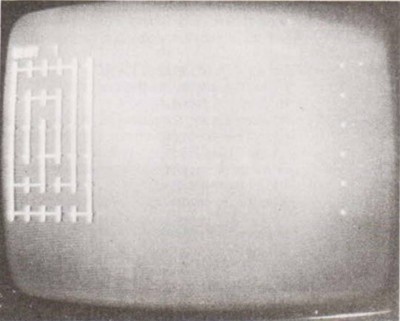 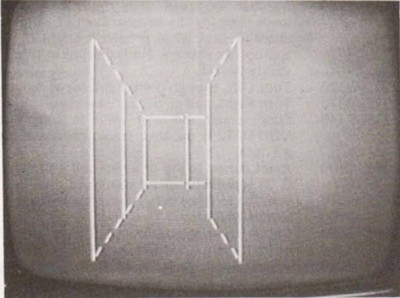 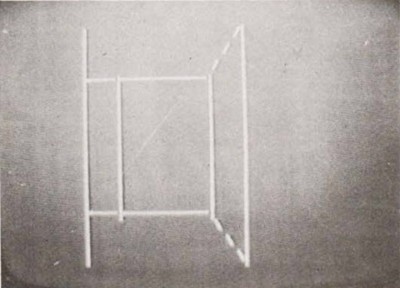 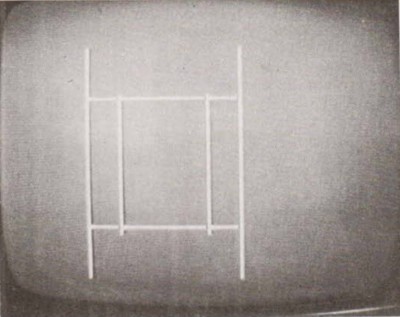 This is a very interesting thread!

3D Monster Maze is my all-time favourite ZX81 game, and back in the mid 90's I was inspired to create my own version for the Psion Series 3a pocket computer.

I wrote mine from scratch in the built in OPL language, which was like a structured version of BASIC. It was also mostly written on the train journey to and from work, as befits a portable computer.

It used a single two dimensional array to store the maze. I didn't know much at the time about how 3D Monster Maze actually worked, so my monster behaviour is much simpler - it just follows a breadcrumb trail the player leaves behind. The clever thing is it stores the direction the player moves in so it always takes the shortest route to the player. If the player goes down a side passage, then reaches a dead end and comes out, then the monster will ignore that side passage and head straight for the player, whuch makes it quite challenging to play. The monster is relentless and never lies in wait!

The maze had various sizes and you could also change the way the maze was generated so it would create extra paths through the maze (i.e. there wasn't just one route through it.)

You could also view a map which only showed the areas you'd explored.

The dinosaur was drawn from photos I took of a dinosaur toy model, scanned in, then rotoscoped over in Deluxe Paint on the PC. (No digital camera back then).

Unlike the original game, mine had sound effects

Some screenshots for your perusal. 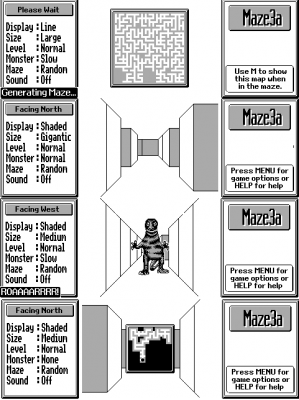 I still have all the source code and assets for this game.
Top
Post Reply
5 posts • Page 1 of 1