It's a 3D Tic-Tac-toe basic Game…
Something wrong in the display routine/ASM routine.

I've corrected all typos and found and fixed a bug in the actual program. The game now works ok.

Unable to launch it...

This one proved a bit tricky but I finally got it working. There were some data values incorrect but the main problem I encountered is that EightyOne does not properly emulate the ZX Printer - it can't output a line terminated early with NEWLINE, which is what the program was doing. This can be independently demonstrated by powering up with 1K RAM, printing some text to the screen and then trying to COPY the collapsed display file.

To prove there wasn't a problem with the program itself, I ended up recreating it exactly as described in the magazine, i.e. with the machine code and character definitions stored only in memory in A$. But it still did not work properly, leading me to conclude there must be an issue with EightyOne. I finally tracked down the issue in the EightyOne code and a fix will be included in the next version released (v1.24).

I've tried to find an emulator, that would print text from the Word Processor Word Sinc II, and EightyOne failed. However I have just found, that printing in SZ81 works fine. So maybe try the program with SZ81.
Martin
https://zx.rtin.be
ZX81, Lambda 8300, Commodore 64, Mac G4 Cube
Top

I havn't read the article yet, but output from program 5 in SZ81 is here, and it looks great. 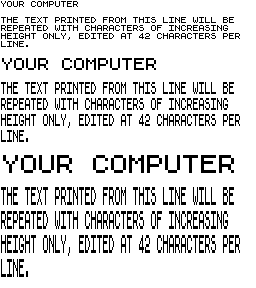 Version 1.24 of EightyOne now includes a fix for the bug with the ZX Printer emulation.
Top
Post Reply
117 posts