by YanKleber
I don't know if some member from Brazil has had the interest of start such thread, so please forgive me if I am digging an old subject up. I started my computer life with a Sinclair computer as many of us here BUT I did not this with the original stuff. The reason is because in the 1980s we had a Brazilian company that brought those machines to here. The company name was Microdigital. Between 1981 and 1986 we got a complete line of those small gems:

The "TK-82c" - the clone of the ZX-81... I had my first contact with personal computers at the house of my daddy's buddy. He was an old fart that enjoyed play radio operation, telegraph and happened to buy one of these computers. When we arrived at his place I stuck to the table where it was and didn't left until my dad drags me out back to home. That day I decided that I had to have one of those things. Around one year later I sold my bike and used the money to buy a TK-85 (the next computer you will see). 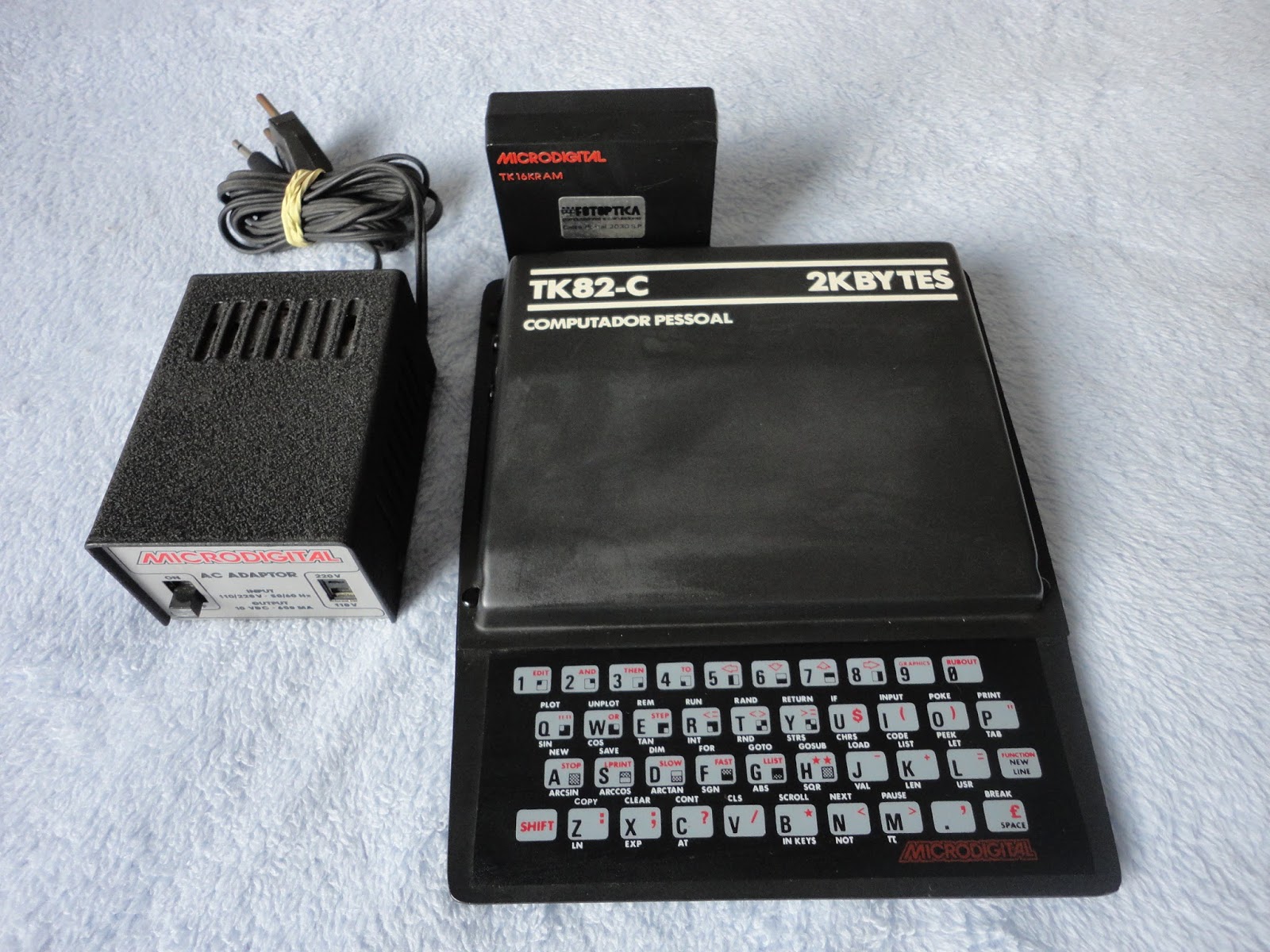 A few time later they released a face lifted version of the TK-82c named as "TK-83". I know that it existed but I never have seen one of these. 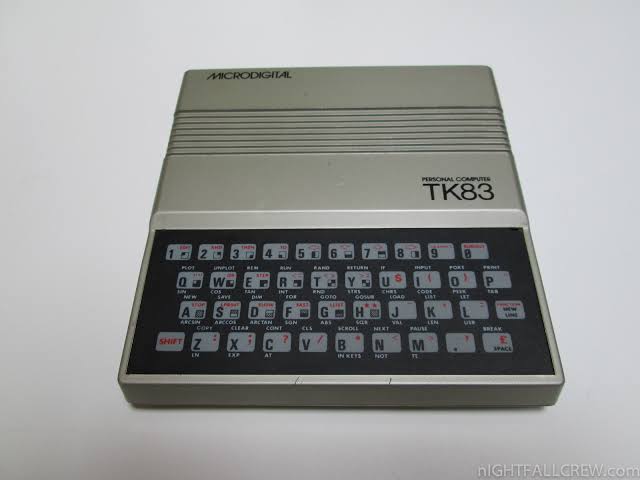 The "TK-85" - the clone of the TS-1500 - It was my very first computer bought with the cash I got selling my bike... the reason was because I asked to my parents to buy me one and they said 'nah it will be one of those expensive useless stuff that you will end abandoning along with your crap'. Well, they didn't tell exactly this but you got the message. So my only option was to buy one myself, something not too much easy for a fifteen years old boy. Anyway, because this computers became my professional life. 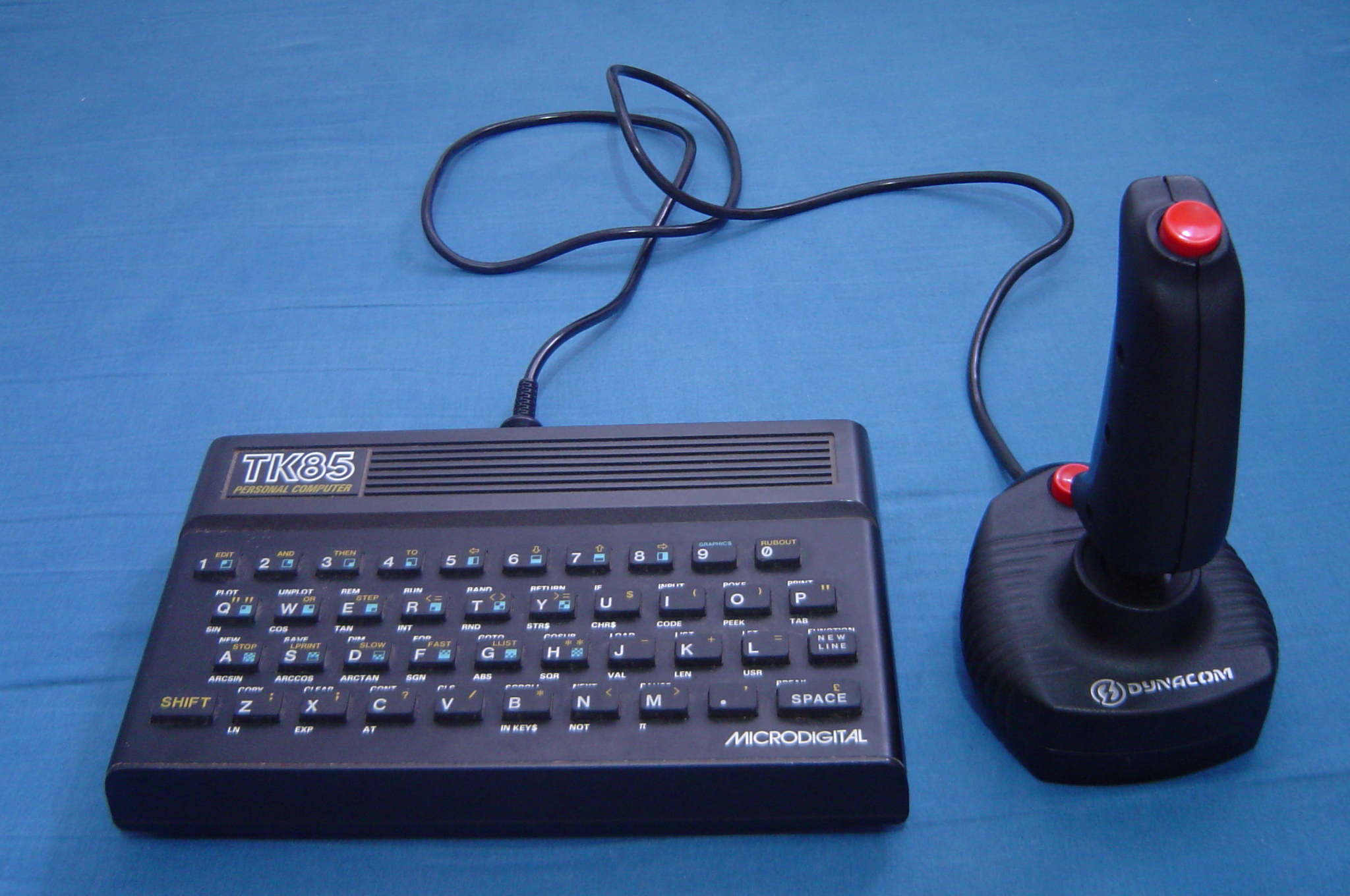 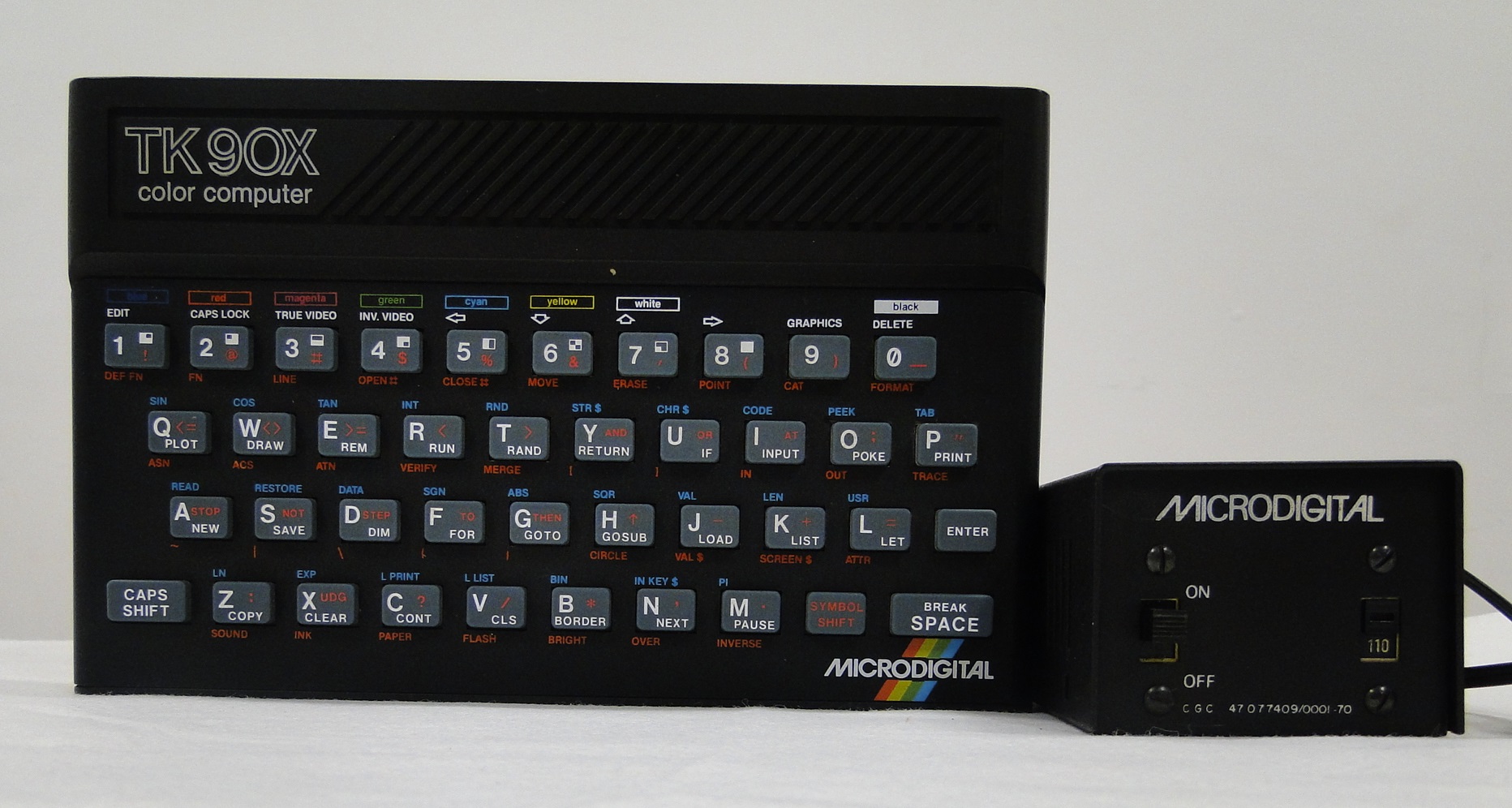 The "TK-95" - a kind of "compact" clone of the ZX-Spectrum 2 without the cassette section. It's major improvement was in the keyboard... I never had the opportunity of seeing one up close. 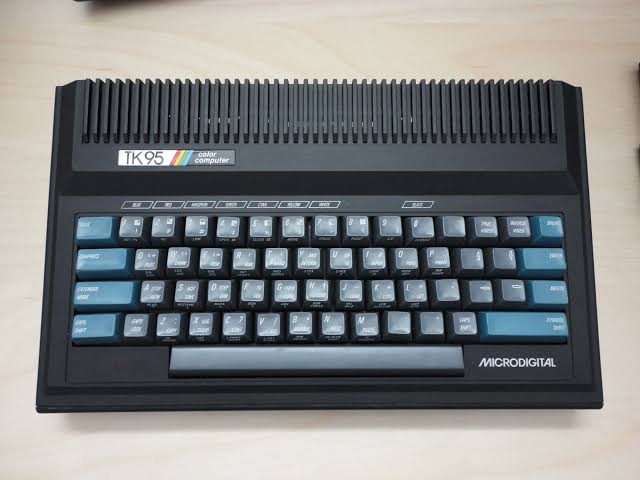 As far as I know the versions were legit copies allowed through an agreement between Microdigital and Sinclair. Enjoy!

EDIT: A few time BEFORE Microdigital start producing and selling the "TK" line, a magazine about electronics for hobbyists called "Nova Eletrônica" (New Electronics) released a version of ZX-80 in kit version (just like the ZX-80). It was named here as "NE-Z8000"... A friend of mine had one of these but by the time I still didn't have any interest in the subject. I remember to watch him demonstrating it to me in his home but it really didn't hook me up by then. It may have been around one year before I fall in love with the TK-82c. 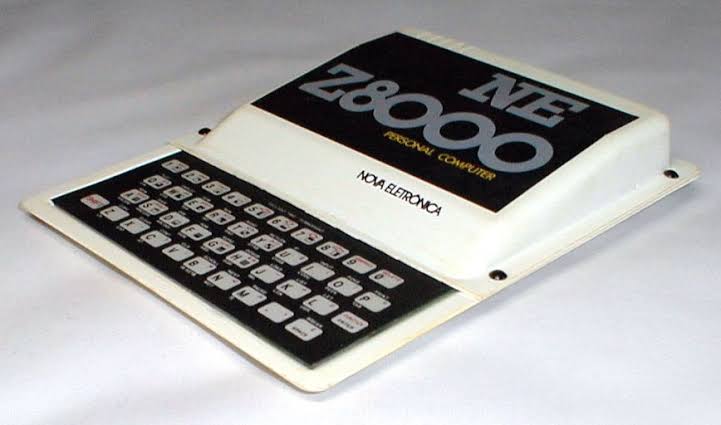 by Moggy
Excellent pictures and many thanks for posting them.

We have at least one other Brazilian forum member,Kmurta (Kelly Abrantes) who I believe is familiar with these computers and if he reads this thread may have something to contribute.

by Sinclairs-great
Hello
What were the games like on your spectrums.

I am not sure I got what you mean but the games we played on "our Spectrums" were the same as you did on yours! The TK-90x and TK-95 are true replicas able to run 100% or Spectrum software.

by Sinclairs-great
@YanKieber sorry you didn't understand what I was saying . I was just wondering what the games were on your home pc ( your spectrum, or what ever games machine you had around the same time as the spectrum )

Sinclairs-great wrote: ↑Sat Jan 11, 2020 9:34 pm @YanKieber sorry you didn't understand what I was saying . I was just wondering what the games were on your home pc ( your spectrum, or what ever games machine you had around the same time as the spectrum )

Well, when I owned my "spectrum" (actually by the time it was a TS-2068 with a Spectrum ROM cartridge) I had a bunch of games that I exchanged with my friends. Being from Brasil and being 1984 there wasn't a lot to share but my favorite was Jet Set Willy!

Other than that I didn't have anything else. I never was a 'game guy' and believe it or not I never had a videogame. When it came the IBM-PC era I have played a (few) games such as Diablo, Castle Wolfstein 3D, Doom, Crime Wave, Phantasmagoria, Tomb Raider, Noctropolis and Zork Nemesis that I can remember. Curiously, although I am not addicted to PLAY games I have been very proficient in CODE them! From 2006 to 2010 I have wrote over 300 games for clients all over the world, mostly web games made in Flash.

by Sinclairs-great
@YanKieber. What games have you made and where could I buy them?

LoL, my games never supposed to be done to be sold... as I mentioned I made them for clients that usually distributed it for free or put it on the web for online playing.

Also nothing for ZX Spectrum (or for any specific computer / system). They were made in Flash and one of the reasons why I stopped to make it is because Flash was discontinued by Adobe several years ago.

Anyway you can find some of them still running here:

http://www.lostjungle.com/cat.php?id=1&p=1 (LadyBug, Helix Commando, Turtle Crossing, Submarine Interceptor, Q Turkey, Hungry Monkey, Busy Burger, Toilet Action, Lawnmower Action, Dragons, Cheese Hunter, Vacuum, Eggs, Pot of Gold, Bug Stomper are just a few... on all of them you will find my name in the main screen of the game). Mostly of my games for Lost Jungle were action games but you may find some in other categories such as card games and others too.

There is this Math game website called HoodaMath for students that I collaborated for a few years until they hire a full time coder. Some of my stuff (unfortunately no credits here):

Also I wrote several games from an Asia company that distributed games in CDs within cereal boxes (sorry, it was never revealed to me the name of the company, actually I think they were a client of my client that probably was a marketing agency). Unfortunately I don't have a link for the games, but they were a few dozens, the production there was really intense and by the time I had to get two coders to help me indeed.

Another company I worked for and that you may know is an American magazine called Field & Stream. I think they belong to a holding company called Bonnier Corp. I have made a hunting game for them that was given to subscribers of the magazine. As far as I know it was the bigger company I have made something for.

But it was just the tip of the iceberg. There was TOO much more than this, but it was over 10 years ago - the good old times before the 2008 crisis. By then there was an online job agency called "Rent a Coder" that I was part of and I hooked tons of clients there. I had then clients all over the world but when the bubble popped I lost mostly of them (almost all bankrupted) and things never were like that again. Then after a while Adobe stopped with Flash. I still kept doing something until 2011 (HoodaMath was my last client) and that's when it finally stopped. Fortunately since 2006 I already had an online remote full time day job on an American company (that I still keep) and it's not related to games!

But I appreciate your interest in my past game stuff! I really like simple and straight forward games like the ones above and I confess that I have thought several times to remake versions of them. But I think that my time is gone... for ZX I would have to learn Z-80 Assembly from the ground and I honestly don't feel all this enthusiasm inside... LoL! Perhaps someone skilled on Spectrum machine code and looking for some inspiration may find a starting point there... Who knows?