The first ever Lambda entries for the CSSCGC...

The first ever Lambda entries for the CSSCGC...

Since I've been relieved of the duties of hosting the comp.sys.sinclair Crap Games Competition, I've returned to writing games for it instead of reviewing them. And I'd been planning to do something for the Lambda, just in case that game I was half-promised last year never came to fruition. It may still do, but I could wait no longer...

...and so I took a type-in from Sinclair Programs in mid-1983 and converted it to the Lambda, seeing that those in-built game-graphics looked like an alternative set of Grumphers to those of the original. There are two versions of the game - a silent, monochrome, minimalist 2K version and an all-singing-all-dancing 16K version with colour and sound and... you'll still wish you'd stuck with the Spectrum version instead. 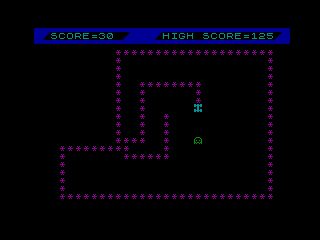 Andy Jenkinson is doing a fine job hosting the competition this year, and I thought I'd troll him on April 1st by sending a conversion of his own game from last year. Seeing as he'd made a strange-looking large-print text routine using some diagonally-divided squares, I thought "hang on a minute, the Lambda has those already programmed in..." and set about the Lambda conversion. And that's how Rubik Code did an EX DE,HL where one host and one author are in each double register, if you see what I mean. In this game, if you can beat it, the MUSIC command plays an actual tune. 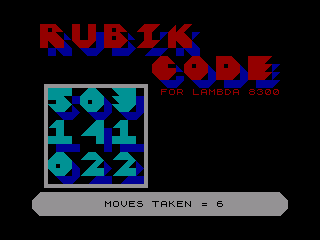 Andy's assertion that the game is "interminably, glacially, oh-my-god-has-it-just-necked-a-jar-of-vallium-y slow" (sic on the "vallium") is absolutely correct, and I knew that before sending it. The conversion was done in a day, most of which was spent replacing the bits of the Spectrum listing (such as READ/DATA for the large-print routine) that the Lambda couldn't handle, just so I could get it done in time for a CSSCGC April Fool. Thing is, it should be possible to speed it up if the large-print routine can be done in machine code.

And now that I know how the colour interface works, it should be possible... shouldn't it?

Watch this space if I make more CSSCGC games for the Lambda. Don't expect wizardry, though!


EDIT: images are now hosted on my own website. There should be no compelling reason why they don't show up now.
Spectribution: Dr. Jim's Sinclair computing pages.
Features my own programs, modified type-ins, RZXs, character sets & UDGs, and QL type-ins... so far!
Top
Post Reply
1 post • Page 1 of 1