I have found quite a few old tapes. Some of them are Power 3000 tapes. Question - will the EightyOne emulator be capable of running the Power 3000 games? Running the Lambda 8300 hardware. Or do you need a different emulator?

I have attempted digitising the tape with a utility one of my friends has made:
https://github.com/mvindahl/zx81-dat-tape-reader
But it has been unsuccessful as it ends up with different results for both sides. (It has proven quite easy to use in other cases) 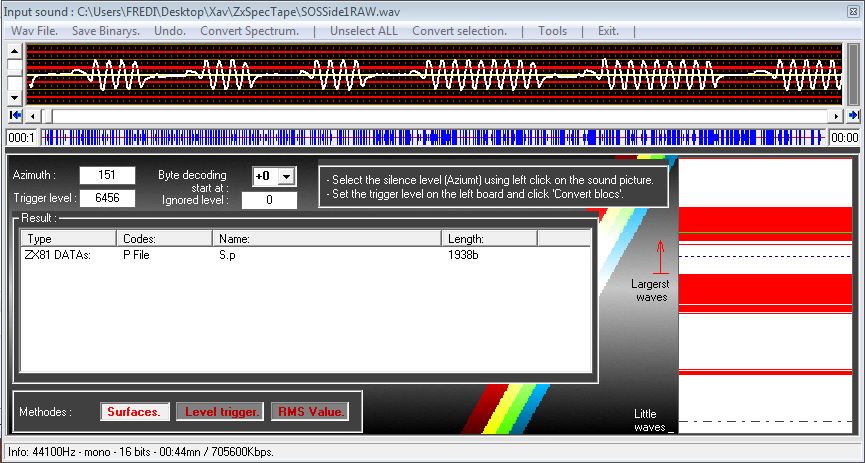 Try to load the wav file in "ZxSpectape", select all, reverse the signal and run the "auto-symmetry" filter.
Save it in another wav file...

And try again on your favourite emulator.
Have fun!
Top

But something wrong on the second side: 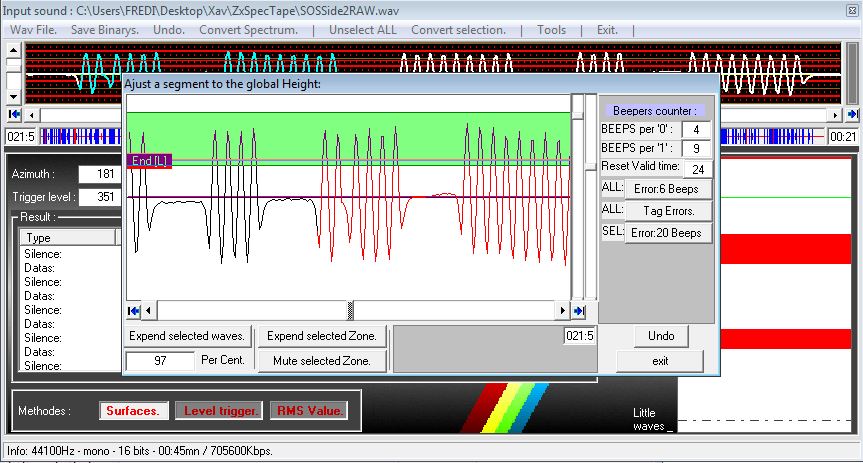 Loading it into JSZeddy shows that side 1 is corrupted as well. 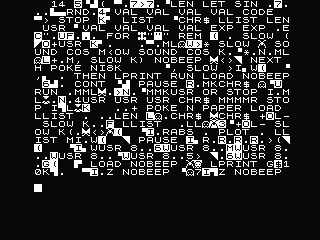 Looking at the recoding in Java ZX81 Tape Converter it looks beautiful.

Looking at the description of the file format of Lambda 8300 it seems Lambda files should start with $FF where ZX81 files start with $00. Maybe some WAV -> P utilities will corrupt the file by setting a $00. Seems there's no file format for Lambda 8300, so WAV is probably the best way.

Unfortunately my installation of Eighty One won't emulate Lambda 8300 at the moment. The great thing about Eighty One is that it supports WAV files.
Martin
ZX81, Lambda 8300, Commodore 64, Mac G4 Cube
Top


To launch the Lambda EO emulation, you had to select:
[16 K ram.]
[Protect ROM from write.]
[NTSC TV.]
All other captions must be unselected...
Top

Thanks a lot for your assistance so far. I wonder if it would be possible to patch a version of the tape - using the best bits from each recording?
I guess this is the idea with the "Java ZX81 Tape Converter" tool - but I never quite got the idea.

Noob question: How do you see that the tape is corrupt? The example from side 2 is pretty obvious as there suddenly are 5 pulses instead of 4.
XavSnap - in your example above - how do you detect that 4 signals are missing?
Last edited by andejens on Sun Dec 17, 2017 10:34 am, edited 1 time in total.
Top

Same problem regard the second side...

A REM line can be displayed...
Perhaps it may be retrieve using the side 1 end part.

best bits from each recording?

I tried to retrieve "The tube", the first part is too loud and corrupt, the second one seem ok, but... don't work!
Top

Just use another soft recorder.
Some of them had to corrupt the recorded file, due to a bad software buffer!
It trim the WAV file and delete some datas in the target wav file...

I ever seen it on Apple sound recorder!
The tape isn't corrupt, but the wav file seem to be cut and create a bad signal.

I don't know if it's due to the encoder, the MPG1_L2, or the resolution converter... using a memory cluster of data...
But, some of datas seem to be deleted in this target wav file... and all other files, recorded by this numeric recorder!
I suggest to use another tool (software) to get the dump... this one seem bugged!

Andejens, try to record it using another computer or get another software, and try again in EO.
.... Or use the raw sound file...without conversion!
The tape reader is not corrupt, ... it simply a numeric failure due to your software.

The best way to dump datas, is to load the tape sound directly on the emulator, without numeric recording...

Maybe the same problem on "The tube" !