I read on Dataserve Retro site that there maybe a version 3 rom, was that ever released.

by 1024MAK
There is a list of known ZX Spectrum ROMs here, but many are not available to download from there, including the IF1 ROMs.

Whether these chips are available is another matter, maybe an adapter board can be made to fit a 8K Eprom for the updated rom code. 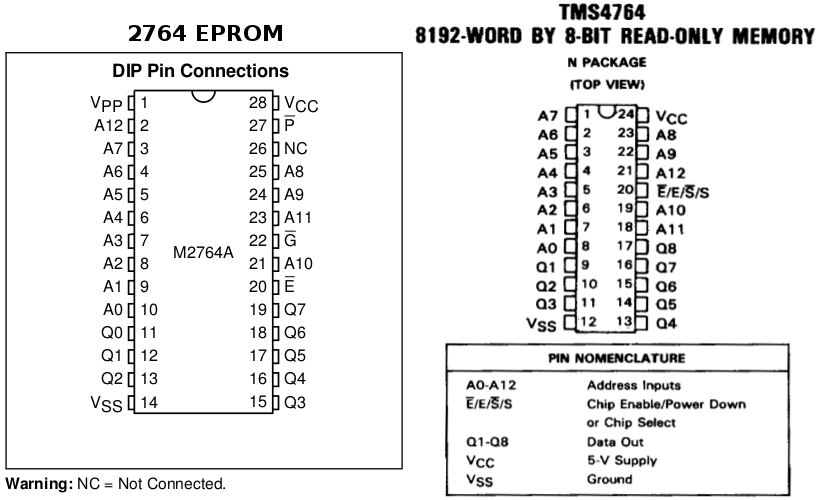 by 1024MAK
It may. But keep in mind that a 4764 ROM has pin 20 mask programmable and I know in the QL, the ROMs used positive logic for true (active high chip select). I don't know what the Interface 1 uses.

Pity a static ram chip could not installed so custom rom images could loaded.

by Fruitcake
Perhaps a bit of a late contribution to the discussion but it you preferred not to modify your ZX Interface 1 then you could instead override its internal ROM with a version of the edition 2 ROM running from a ZXC4 ROM cartridge via a ZX Interface 2:
http://www.fruitcake.plus.com/Sinclair/ ... _RS232.htm

by Erm
An even later contribution, but I've been playing with a few IF1's lately and have found that with 2 of them the ROM chips had failed. Very often it's the ULA that goes, but it seems the ROM chips can also die. Might be a coincidence but both were also the same type - TMS4764NL ZX84208 B8340L, made in Singapore (v2 versions from this manufacturer clearly state v2.0 on them and seem more reliable).

I haven't actually tried replacing an original ROM with a 2564 EPROM yet though, as it's just so fiddly and I had enough originals to go round (so far).
All times are UTC+02:00
Page 1 of 1