Don't mind the fake throw switch on the right, I'll replace it with a real blade switch to control the inverse video as soon as I can find it in my piles of junk. 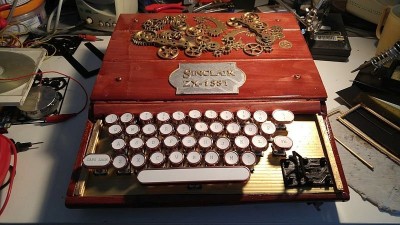 Hope you like it! Oh btw don't freak out vintage lovers, the original case & keyboards are totally unharmed.

You had to change the character set…

by Dim_75
Welcome !
Nice work.
Do you plan to pimp also the memory by using ferrite core memory ?

Try to use 2x 512 bytes ferrite core memory module as used in an old CDC 6600 to remplace the 1ko buid-in memory of the ZX ? 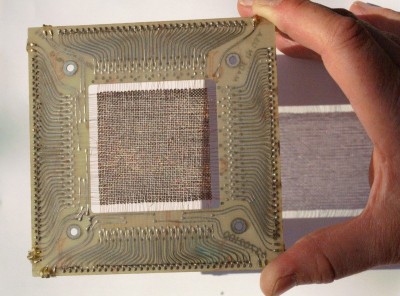 Try to use 2x 512 bytes ferrite core memory module as used in an old CDC 6600 to remplace the 1ko buid-in memory of the ZX ?

No that's far too modern, mercury delay line for the win!

by Enigmachine
Hi all,
Thanks for the welcome & good words, it's great to get some positive feedback when most of the world doesn't "get it".

Regarding the RAM, I was thinking of using some of Babbage's mechanical designs but since he died in 1871 I thought I should use something more modern, like iself-sustaining steam switches. I just don't know where I will store the coal safely, my Zeddy's shell is wood, after all.

I HAVE gone completely overboard with the internal RAM chip, I even put a copper heat sink on it, even though it is never used because of the ZXPand+. 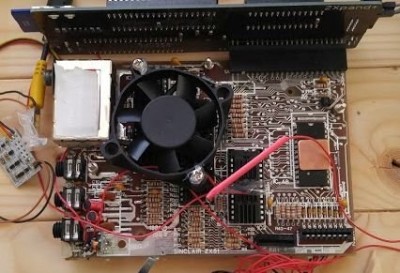 Don't mind the horrible wiring, I'm still deciding where to place things. That fan on the ULA makes this the loudest Sinclair in existence, thankfully I can switch it off or replace it with something much bigger and it will still fit in the case.

by Moggy
I too have a fan cooled zeddy which I put together after someone wondered (Lardo I think) if it was possible with standard cases. It's a 40mm 12v , tapped off the 9v input and sits in a square in the lower case, made by removing the vent slats. Fast enough to create air movement and whisper quiet with hardly any noticeable heating of the upper case at the regulator location or the ULA location.

by Enigmachine
Moggy, I might try to insert a tiny blower-style fan below or to the right of the CPU/PLA with an air tunnel blowing on PLA heat sink in a future project, like what you would find in portables. A blower might be thin enough to fit over the resistors in a standard case and even at slow speed should have enough cooling.

I have 3 TS1000's here so I have plenty of opportunity to experiment but I think I may have killed one of them running it without any cooling. We'll see when I'm done with this ZX-1881, I definitely want my next Zeddy to be a "Sleeper" upgrade and a fan on the bottom would give it away imho.
Also my guess is you could run the fan at much lower voltage (and more silently) if you can put the cool air precisely where it's needed.

Anyway, must add that to one of my to-do lists.