The next 24th of September it will be 5 years old

So this is a special anniversary edition.
Yes, I know we are not on 24th yet, but I wanted to publish it now so you have the whole weekend to enjoy it!

You must go to the Releases section on the GitHub project to download It, as usual:

And, of course, the source code, so people can compile it by themselves.
Don’t forget the extras package, so it contains lots of games, demos, programs and documentation.

Improved debugger:
*Now you can use every register, variable, number on any position of a condition (left, right), so the following breakpoint conditions are now valid:
32768>PC
HL=DE
3=PC
DE>IX
etc...
*Optimized debugger so common conditions like PC=X, MRA=X or MWA=X use lots of less cpu than before
*Added new kind of breakpoints, "memory breakpoints", which behave like MRA and MWA conditions but a lot faster than them
*Added bitwise operators AND (&), OR (|), XOR (^) when using registers/variables breakpoints/watches
*Breakpoints actions do not reset keyboard
*New pseudo variables:
**OUTFIRED: returns 1 if last Z80 opcode was an OUT operation
**INFIRED: returns 1 if last Z80 opcode was an IN operation
**INTFIRED: returns 1 when an interrupt has been generated

Fixed bugs on esxdos handler:
*readdir call was incrementing PC register when there were no more files
*added ESXDOS_MODE_CREAT_TRUNC mode when opening files
*BCDE was not returning from a f_seek call
*fixed mode OPEN_CREAT|WRITE which has appending data after a seek instead of overwriting
*added f_stat,f_unlink,f_rename,m_drive_info,f_sync calls
*fixed loading help screen on esxdos nmi handler
*fixed loading esxdos files with plus3dos header

Some other minor bugfixes and improvements

I hope you enjoy it!

by bru65pag
Hi Cesar,
thanks for the great work, I appreciate being able to use an emulator directly from my linux machine without the hassle of Wine or VirtualBox...
Question (not related to 7.1): I'm trying to run Celebration and Against The Elements, from Paul @ fruitcake.com. The graphics are hires, but the display is incorrect. Any clue what that could be? 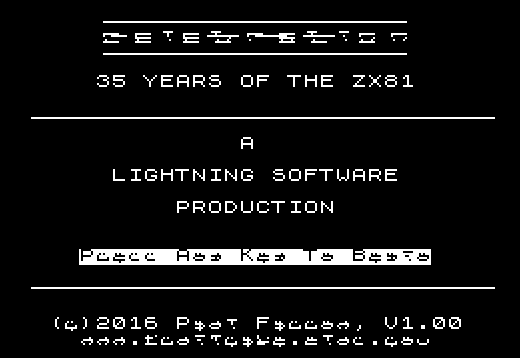 by chernandezba
I will try that on ZEsarUX and tell you if I find the solution
All times are UTC+02:00
Page 1 of 1