We break the cycle of weekly updates for an important announcement!

Snail Maze is a demake of the game that was built into the Sega Master System until some kid(d) called Alex kicked it out again, and it takes up almost all of the expanded ZX81's memory. Imagine how long that'll take to load on real hardware. Good job we have emulators, isn't it? 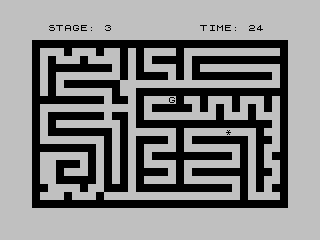 It would take seconds on my real Timex Sinclair 1000 with my ZXPand+ SD interface.

All right, then. Imagine how long that'd take to load from tape... and imagine how many attempts it would take!

The gods of the chuntey field will be very greedy in their demands for sacrifices.
Spectribution: Dr. Jim's Sinclair computing pages.
Features my own programs, modified type-ins, RZXs, character sets & UDGs, and QL type-ins... so far!
Top

Snail Maze is a demake of the game that was built into the Sega Master System until some kid(d) called Alex kicked it out again, and it takes up almost all of the expanded ZX81's memory. Imagine how long that'll take to load on real hardware. Good job we have emulators, isn't it?

I do a full screen maze in 1K…. PATHMAZE
Top

Cramming a full-screen maze into 1K is extremely impressive. I think it's well beyond the scope of any Crap Games Competition! Then again, I might have said much the same about Chromatrons Attack!...

27... it's a number that keeps coming up in my life numerous times. Born on the 27th, lived at house number 27 for 18 years until earlier this year, watched 31 years' worth of F1 in which that number is still indelibly associated with Ferrari in the 1980s and early 1990s, despite Nico Hülkenberg's efforts to claim it as his won. And it's a perfect cube on top of all that.

Week 27 has seen only the one game submitted, Snail Maze, ripped from the original Sega Master System's memory, translated by Salvador Camacho into C and dumped on the ZX81, which is surprisingly adept at handling it.

The next target I have for this year is 37 entries, which would equal three previous competitions - those of 2001, 2006 and 2009. Then, the ultimate goal for the year can be tackled - will it be possible to make a Cassette 50 out of the Spectrum, ZX81 and ZX80 entries, and maybe those for the SAM Coupé (that I haven't had yet!) and the Jupiter Ace (of which I have one)? QL and Z88 entries continue to be very welcome, but cassettes don't feature on those machines. So I'll need closer to 60 entries for that.

Can it be done? I'll do the reviews, you lot make the games. Crack on!
Spectribution: Dr. Jim's Sinclair computing pages.
Features my own programs, modified type-ins, RZXs, character sets & UDGs, and QL type-ins... so far!
Top

Just the one game - though it was quite significant in that it points the finger in a different direction as to who will be hosting next year's competition. For the 128K Spectrum (or a 48K model with an AY add-on): Zombie Dice by name, rather un-crap by nature, another product of Andy Jenkinson and his seemingly never-ending wellspring of creativity.

I look forward to repaying Andy next year with a new torrent of Crap Games of my own...
Spectribution: Dr. Jim's Sinclair computing pages.
Features my own programs, modified type-ins, RZXs, character sets & UDGs, and QL type-ins... so far!
Top

"And there was much rejoicing", as if the Knights of the Round Table were forced to eat Sir Robin's minstrels:

Salvador Camacho has been busy again, writing in C, running it through Z88DK and producing a ZX81 machine code game that resembles a type-in from 1983 but which runs faster than anything ever found in the pages of Sinclair Programs. This one appears not to be a clone of an existing game. It's called Wall of China - and no, it's not Breakout by a different name. 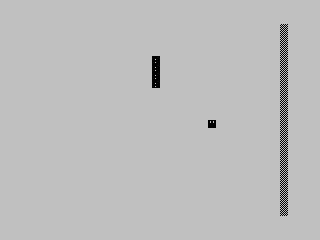 It's a great day for my tenure of the CSSCGC: I've equalled the record for the number of ZX81 entries in a year, which was set in 2004 during the late Jim Langmead's hosting of the competition - it was the first year ZX81 entries were ever seen, and one of the contributions was my utterly magnificent Advanced Horseshoe Magnet Simulator. I've heard from Salvador that he's got another game in the works, so unless that's for the ZX80 (which I suppose it could be), the record will be broken some time in August. Double figures is certainly possible and I'd like it to be probable. ZX81 programmers, you know what to do. Mush!
Spectribution: Dr. Jim's Sinclair computing pages.
Features my own programs, modified type-ins, RZXs, character sets & UDGs, and QL type-ins... so far!
Top

Another week with something in it, but also, it was once again only a single entry. I've started wondering if I should still do the weekly round-ups seeing as they're more for the benefit of both this forum and the QL Forum which don't get every single entry announced immediately (ZX81/80 entries here, QL entries on the latter, fairly obviously) but I've done this for more than half the year so I will continue until the bitter end.

Hence, what I have to remind you about - if you didn't just scroll up and see the post above - is that this week's entry is Wall of China, another Z88DK-compiled effort for the 16K ZX81 by Salvador Camacho.

Next time I post one of these updates, I'll have another year on the clock. How many more there will be to come after that is anyone's guess, but I'd like to think there'll be one more, given how many ideas I have for next year's competition...
Spectribution: Dr. Jim's Sinclair computing pages.
Features my own programs, modified type-ins, RZXs, character sets & UDGs, and QL type-ins... so far!
Top

Nothing. For the first time in... a while, admittedly, but still, nothing this week. Maybe you're all on holiday. But it was my birthday week so I was hoping for something, and as I've now turned 42, did I dare to dream of something Hitchhiker's related... anyway, at least this has given me a bit of time to work on my entries for next year. I have one finished and six more that have at least been started.

(And this may not be quite so relevant here, but I'd kick myself if I didn't at least mention it...)

Anyway, there is the small matter than in two days - well, one day and a few hours - it will be AUGUST. And this means that the delivery of the Next is due. Who's checked the CSSCGC website recently - or at all this year? I've reserved a slot on the "individual machines icons" for the Next, rather than lumping it in with the "????" alternative machines such as the Jupiter Ace, SAM Coupé and Z88. And thus I am hoping that the last of the zeroes on the front page is going to be removed soon.

Remember - I intend to review any Next submission on the real machine, so those of you with an Issue 1 Next - or even just those who know how to use the TBBlue settings - get to work!
Spectribution: Dr. Jim's Sinclair computing pages.
Features my own programs, modified type-ins, RZXs, character sets & UDGs, and QL type-ins... so far!
Top

Hi,
maybe the Vogons planned another intergalactic bypass near Earth recently and trying to deal with it taking more time than planned.

Wall of Chine is quite fun! Let's see next week if new stuff will arrive !
Top
Post Reply
75 posts