I've finally finished a Hi Res sequel to my old 1994 game Masada Class. This continues the story which left the heroic Masada damaged in space and spinning out of control after defeating the alien menace. In this game, you are the AI of the newest ship off the line - the Calvary. Travel to the alien galaxy. Fight your way through the alien fighters. Locate the Masada, rescue it and bring it home.

You may like the scrolling star field background with parallax. I don't know if that's ever been done before. It takes up a bit of processor time and I did consider dropping it to speed the game up, but it just looked too good to lose. So I reduced the number of aliens from four down to only three.

This game will run with colour using a Chroma interface and supports Zonx sound. However, if like me you don't have either it will run on a real ZX81 with just a standard 16k ram pack. 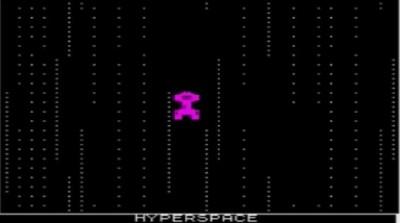 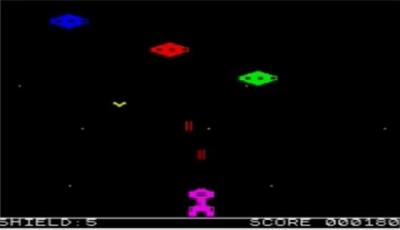 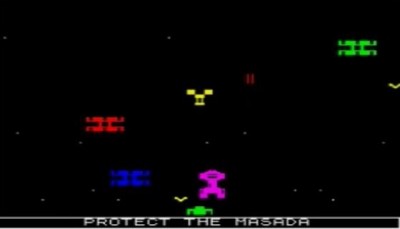 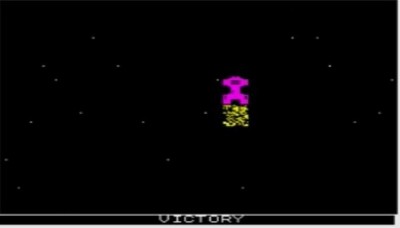 Unlike most ZX81 games the Calvary can fire two laser blasts at a time that travel at double speed. So no messing around with only one shot at a time that moves up the screen one line per frame. The Calvary packs some real firepower! So try it out if you want to kick some alien butt.

It's just too easy to beat and over in no time and I'm possibly the weakest gamer in existence( I struggle with Bruce Lee on the spectrum), so perhaps drop the star field and increase the aliens back to four to make it more of a challenge.


Just my two cents worth.

A valid point. I had wanted to add powerups and more stages however, by the time I had the backbone of the game programmed there wasn't much memory left. In hindsight, perhaps I should have done it in lo res.

Still, it could make a good basis for a low res game with more stages and more features.
Top

Both Chroma and ZXpand provides at least 32k RAM, so it wouldn’t be bad to use that amount of memory for your great games.
Martin
ZX81, Lambda 8300, Commodore 64, Mac G4 Cube
Top

Bukster wrote: ↑Fri Nov 15, 2019 7:29 am A valid point. I had wanted to add powerups and more stages however, by the time I had the backbone of the game programmed there wasn't much memory left. In hindsight, perhaps I should have done it in lo res.

Still, it could make a good basis for a low res game with more stages and more features.

Buckster please keep it hi-res as I said before it looks and sounds great and as Martin says both the xpand and chroma have double the normal memory and are used by a lot of people so a 32k version would be most excellent I would think.
Top

True, but I'm trying to write games that will run on original hardware. It's a personal rule, however if I put that to one side, there would be enough memory for powerups, more boss battles etc. This is my second hi-res game and the way it eats memory does mean I can't do as much as I'd like.
Top

Or you could load next level on tape. Then you save space, and it will still work on old hardware.

If the ZX81 cannot access memory over 32k, does that mean with 8k taken by the ROM, you've only got 24k to use? Minus screen ram (lo res 792 bytes) and it's closer to 23 kb usable ram. Is that correct? If I'm using hi res the screen is around 6K, so that would be 18kb usable ram

It's still a lot more that 16k, which becomes 10 for a hi-res game once screen ram is taken inot account. Perhaps I should get a Chroma.
Top

I've tried to give some examples of what can be stored where according to the memory configuration.

Video must NOT cross the 32k barrier. It has to be either below or above.