, so i decided to finish and share my little (1K) projects of past year.

At the end of the summer were broadcasted the "TRON" ('82) and the "TRON: Legacy" (2010).
Of course i wanted to play immediately.
I remembered Andy's program, downloaded it and tried it out - but it was too fast for me.

Then i played with RobertK's H-Tron, which has reasonable speed but i did not like its 2 buttons control (left/right).

I checked the source code for both programs and then came up with the idea to rewrite them to 1K, using more comfortable direction and speed control. (and i could also try DrBeep's startup code) 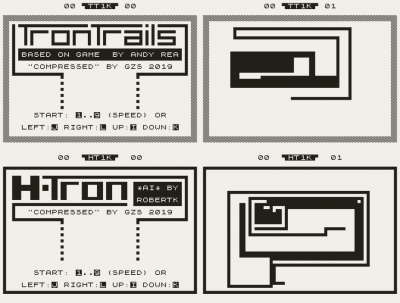 Then i read more about "family tree" of these games and found the root: Blockade ('76) was the 2 players variant, "the first of what would become known as snake games".

So my next step was to create it in 1K, which i did with two kinds of control (2/4 buttons).

I believe the 2 button control is much harder

Finally, the "side-cousin" was created, also in two versions (it is my favourite): 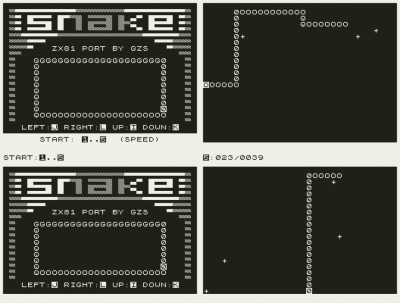 Snake in 1K with and without score displaying

I always had a love for Andy's Tron Trails so many thanks for this Zsolt.

It's unbelievable that you made an 1K version of my game - fantastic job, thanks! I immediately recognized my computer player's AI, that's my baby!

The reason is that I enjoyed playing "Super Sprint" on the C64 and the ST in the 1980s, so I prefer rotational controls.

But that's a good point, this should be configurable. It's the same story as with airplane games: some prefer pilot control (so do I), i.e. Joystick "down" means "up", some normal control.
Top

I wondered how you stored the snaketrail, but you did with characters what I did with hidden commands.
Top

yes, that is the soul of this solution

I am planning a new version of Snake in lowres (with hidden commands as tail) with a gametwist.
It will be a port of a game I made on the ZX Spectrum.
Top
Post Reply
6 posts • Page 1 of 1