Has anyone been successful in expanding the ROM for additional BASIC commands? I know the ZXPand replaced some so I don't know how possible it might be. I would like to see READ and DATA statements and some of the other common BASIC commands.

Yes, a guy of the german board did this in the past, called POWER BASIC for ZX81.

I like this a lot and I see these new commands.

I will check this out tonight.

It doesn't seem to want to play well with the ZXPand/ZXPand-AY. I tried PB32K.P and PB16K.P and weird stuff is happening. My ZXVid also started to get pretty dark in one of my TS1000 so I'll have to check that out. Im sure it's unrelated to the ZXVid.

Don't forget that ZXpand overlays its own ROM...

Has anyone tried this with the ZXPand?

I'll keep looking at it some more tonight and describe what I am seeing. The name PB32K.P is a little misleading as it does not work with 32K but as the manual states it runs ABOVE 32K. I should be using one of the other variants such as PB8K.P or PB12K.P which runs above the ZX81 BASIC ROM 8K and leaves 16K available for programs. The PB16K runs in the upper ~4K part of 16-32K RAM and adjusts RAMTOP and leaves about 12K free.
Top

If you want to use 32k version you need the M1NOT circuit modification to run assembler code in this area. Without this modification this area can be used for data only as program execution is affected by the ULA video circuit which feeds the CPU with NOP when A15 is high. 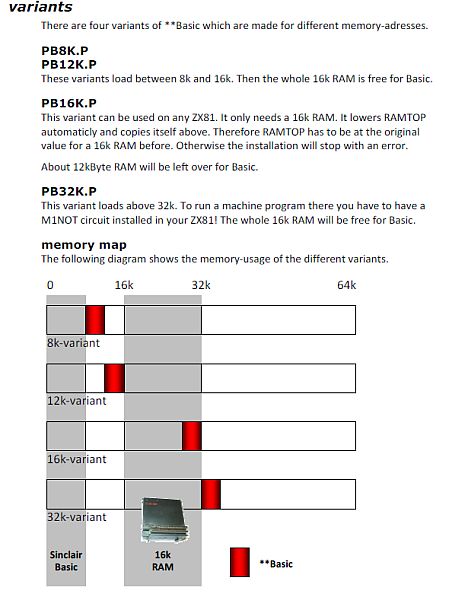 Thanks PokeMon. That's where I got my information I posted but I thought the naming of the file could have been better but it is what it is - which is ok now that I have seen the chart. No problems. However, none of the versions will run with the ZXPAND connected. Using the CAT command for example causes cursor inverse flashing at the very least. Some versions like PB16K.P cause screen rolling at a slant and all variations are really unusable from what I can tell when using with the ZXPAND.

Well that are maybe restrictions from ZXpand - so see the manual of ZXpand.
I think it's working fine on usual ZX81 without problems.

It is using ZX81 ROM routines I think which can be problematic when using the ZXpand.
But as the source code is provided on this homepage as well, you can maybe modify it.

Maybe you ask SirMorris if some of these routines have been moved or removed.

You could always try disabling the ZXpand ROM after loading with the command:

Check out our items for sale
Top
Post Reply
18 posts