Obviously does not use GOTO, which I don't think would be any quicker, just another way to solve the same problem.

by poglad
Well your avoidance of GOTO has simply made it use more bytes really, as well as subverting the usual meaning of FOR. But anyway - one thing I remember from my 1K days is that NOT PI gives you zero in two bytes, whereas PI-PI takes 3 bytes.

by gozzo
Another way of an 'infinite' FOR-NEXT loop:

but surely a normal GOTO VAL "7", and omitting line 6, would use less bytes?!

haven't tried these as of now but have used similar 'strange looking' logic comparisons before!

haven't tried these as of now but have used similar 'strange looking' logic comparisons before!

I was thinking about something like this but really, my brain was fried yesterday.

Thanks for the tips (y)

by olofsen
In the emulator available here http://rullf2.xs4all.nl/sg/z81-2.2.tar.gz I've added a startup flag (-f) so that the six bytes after a number are not stored in the BASIC program when lines are entered. Programs still run, but of course more slowly. Just for fun, to see what changes are needed to the ROM (23 bytes, see function zx81hacks), and to evaluate the decrease in performance. When a p-file is loaded, the six bytes are shown as cursor characters; this could be improved, but gives a visual indication of the space needed to store the floating point numbers.

by Shaun_B
Good work there - nice and minimised, the way I like it

by Shaun_B
As I'm back on 8-bit stuff again, after at least a few years, I thought I'd post this bouncing ball thing but using PLOT/UNPLOT stuff (attached as an image). 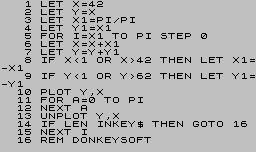 by dr beep
IF NOT LEN INKEY$ THEN NEXT I