Many thanks for this.

I refitted the ZXpand and my second game started off ok with some good tactical play and piece capture by both sides and all was well until the 42nd move which involved zx81(black) capturing ZX80(white)kings rook with kings knight.

The ZX81 made the move but when I looked at the ZX80 monitor the ZX81 knight was being displayed as a black rook and all piece movement stopped, in other words a crash.

I can only assume the ZXpand and ZXpand ROM set-up could be at fault so tonight I will replace the ZXpand ROM with the original ZX80 ROM and use the ZX80 as an original 1k machine with no ram-pack fitted and try again.

I can post the results of the game played up to the 42nd move if you want but to give you an idea of timing it varied between 5 seconds and up to 2 minutes 20 seconds per move by the ZX80 at one point.

The ZX81 took about 2 seconds per move using ZX Chess 2 at the lowest level which I think is supposed to be 1 ply.
Top

Try to make the thinking time between the two engines similar if possible!

Really curious to see the next game!

Thanks for Black start version. It's much better for my old eyes!

I started a new game with the original 4 ply version but after about 20 moves it decided that a pawn could leap 3 squares and capture a bishop! I suspected a memory or ZXpand connection fault so I took my ZX80 apart reseated the ROM and CPU cleaned the edge connector and tried again and managed a complete game which the ZX81 won in 72 moves having promoted 2 pawns to 2 queens . I did log the moves but not the timings but the ZX81 never exceeded 2 seconds, the ZX80 averaged between 5 and 40 seconds and on one occasion 2:30 to decide if to capture opponents queen at the risk of losing its own queen.

I would add that the ZX80 stopped moving when the game was one move from mate and I manually had to make whites only move at that point to end the game.

Tonight I will try a game with the new black start and log timings,moves etc.

I also saw the final mate move refusal behaviour and I've to investigate in it.

72 moves was not an easy win, but with such time disparity I was hoping better. Seems I should probably do something to improve pawn promotion evaluation...

Did you spot other "strange" moves? Can you post the log in the simplest way? If the structure is fixed in some way I can even make a converter to have them in PGN (if they are not already in this format) for better analysis...

Thank you for the tests!!!
Top

Slight problem with the new black version is the king and queens are reversed if you assume white is now black.

The ZX81 has white at the bottom with the king obviously to the right of the queen and the screen cannot be reversed and relies on notational input not cursor control and because we are now saying that on the ZX80 the black pieces are now white then the king and queen needs reversing or the ranks swapping which you say cannot be done.


I have chess for the Spectrum which allows rank reversal so will try that instead as reading the chess board in reverse to accommodate the ZX81 is causing me to make mistakes. 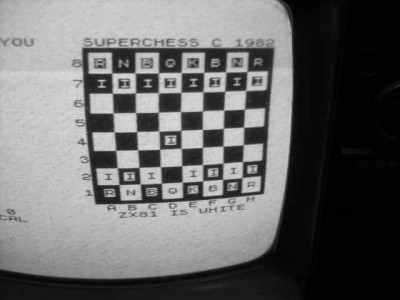 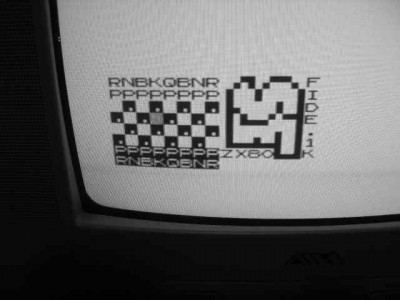 Yes I mirrored not rotate, sorry!!

Good you can rotate the Spectrum at least (the changes for rotation are not difficult but spread in various part of the code and so not a quick upgrade)!
Top

I played a game last with the Spectrum using IS Chess which was supposedly a tournament winner back in the 80's.
It beat the ZX80 but encouragingly it too over 50 moves to do it. I will play again tonight and log the game,timings etc and post back.

The black start is still useful because as you say the logic is different and plays an interesting game.

Even with the "not mirrored" version try to play black (meaning the color at the bottom of the screen) with ZX80 against a Spectrum playing white. As said even without initial logic might play a bit better (moving pawns instead of wasting moves with the tower until something interesting happens)...

Another option might be to start from a predefined opening to play on a leveled field, since most probably anyway the spectrum has an opening book!
Top

"This program is winner of the Second European Microcomputer Chess Championship. The 48K side has more sophisticated options such as altering the colours of board and pieces, printouts and game saving. Cursor keys movement allows you to analyse a move or take the piece back. Illegal moves are buzzed. Eight skill levels and a problem level system whereby the computer can be instructed to look for a mate in one, two or three moves. Comes complete with an instruction manual and a library of opening moves."

So yes, it was a computer chess championship winner, and is confermed that it has a opening book library.!..
Top

All the spectrum moves were timed at about one second.
The ZX80 timings vary and are approximate.

I scanned the notes that I logged as the game progressed rather than type them out again(my eyes are very tired at the moment!) but they should be readable if not let me know and I will redo them.