I've got the ZX81 Berzerk clone to the point where I think it's fit to give you all a Beta version of a new game to play just in time for Christmas. I'm a day ahead of most of you here in New Zealand. For me Christmas is tomorrow.

I any case, here is the first version of ZX81 Berzerk. There are still a few bugs to iron out. Let me know what you think and any feedback to improve it. One thing I haven't put in is that the robots do not move like they did in the arcade game. I'm thinking that would cause speed issues and wouldn't do much for the game in any case. Also robots cannot shoot on diagonals. However, you do get the usual strategies of tricking robots into shooting each other or getting Evil Otto to destroy them.

The difficulty levels also don't do anything. I may just remove that option altogether. There are also only four mazes. Should I put in some more?

The main questions here are the control system with the hold position and fire option and timing. Do you like the controls and does Evil Otto appear too soon or late? 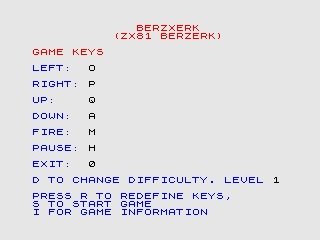 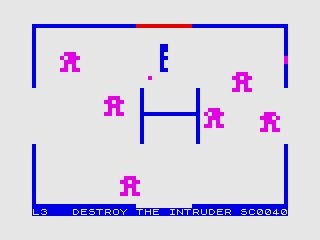 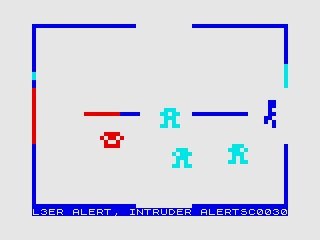 Thanks Bukster for this wonderful Christmas present!

I haven't tried it on the real hardware yet, but here are my thoughts based on an emulator test:

- The control's are good for me, very intuitive for someone like me who has played the game mainly on the Atari VCS.

- Otto's timing seems to be fine for the small ZX81 screen, the timing is similar to the VCS version. On the Arcade version he appears earlier, but on the larger Arcade screen it is much easier to escape from him.

What could be improved:

- Both the player's and robots' bullet (laser) seem to move a little too slow. Do you think that you can make them move faster?

- While the Chroma version looks good already, I would prefer having the original VCS/Arcade look with a black background. But let's first see what the others will say.

It's probably blasphemy to program on Christmas. However, I have managed to get the robots to fire on the diagonals. The aim isn't perfect, but its good enough to keep any player on their toes. I've also put in difficulty levels. The original game became more difficult as the stages increased, should this one do the same or have them selectable?

The stages are 1 - robots do not fire, no Otto. 2 - robots fire, but not on diagonals and Otto appears. 3 - robots can fire on diagonals. 4 - robot bullets travel at twice previous speed.

So I could do it with the difficulty going up to level two on stage two and up every second stage after that for example.
Top

In theory, there is no difference between theory and practice. But, in practice, there is.
Top
Post Reply
4 posts • Page 1 of 1