When executing sketchy locally, garbled text was displayed on the buttons. "CLS" was seen as "DMT", "SAVE" was seen as "TBWF", "LOAD" was seen as "MPBE", ...etc. It didn't take an expert cryptographer to realized a character code was off by 1. A look at dfilezx81.js showed:

On my system, '£' is two byte encoded, shifting remaining characters. Replacing '£' (Shift-3 on a UK keyboard) with my keyboard's mapping to '#' fixed the buttons while keeping the keyboard mapping; however, a couple more problems remained.

The assignment of variable 'i', a few lines down, controls the output on a match failure, i.e. CODE("?")==15. However, this doesn't solve the remaining failure. We need to block output of unmatched characters. Tracing what happens when a key is typed revealed an appropriate place to insert a filter, LMode.prototype.keyTyped in modes.js:

Now sketchy can be used as intended: 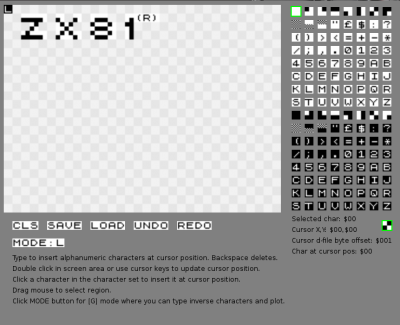 A save and a little processing...