A couple of times in this forum I've mentioned a "Scrubber-Dubber" that I built from a magazine article in 1983 or so. The article was called "Improving Timex/Sinclair Tape Loading" by Tim Stoner, and appeared in the September 1983 issue of "Computers & Electronics". Up until now, all I've had was a very poor 1983-technology photocopy of the article, with a hand-drawn copy of the circuit diagram and parts list, because the magazine chose to publish that part of the article as black on gray. (Grrrr.)

Time, effort, luck, and a few PayPal dollars have finally come together to allow me to obtain a better scan and electronic copy of this article. I offer it here to anyone who is interested in building the circuit. Tim, if you're out there and object to this, let me know and I'll take it down. Otherwise, thanks a million for this great device, which has let me read and LOAD programs otherwise deemed to be irretrievable from problem tapes over the years.

Short summary: The device uses a quad op amp to read and clean up a waveform between the tape player and the ZX81. It also provides a slave recorder "mic" output, so that you can make a clean copy of the original tape at the same time as the ZX81 LOADs, or without the computer entirely. (This was useful for cloning CHESS-CLOCK, which I never succeeded in cracking as I had CHESS from Side 1. Shhh,...) It works brilliantly.

Pretty cool! I built a device for amplifying the audio signal coming out of the ZX81 so it could be recorded effectively by modern devices (iPhone), and provided an on/off switch for the computer. Combine the two and you'd have the ultimate audio assistant.

He-he-he. Ya, I'd picked up a shoebox full of orphaned Dymo cartridges somewhere, and kind of went nuts with it.

This recalls me a very strange experience I had while trying to recover some simple ZX81 game from an original (but cheap) tape.
One of them had a crazy but in it preventing it to be loaded even on a true ZX81 machine: in place of the gap between two bits it had a continous frequency, if I remember correctly it was one extra oscillation.
Cleaning the wave file but flattening it made the conversion possible but I couldn't explain that ..the square wave was perfect and clean but wrong !
My assumption was that one of these boxes did a bad joke: opinions ?
Top

Sounds like some random noise got into the electronics of the tape recorder while making the recording. Spark from a flaky light switch? Stray radio signal? Maybe you detected a neutrino!

Maplin (in the UK) did a similar thing for the Spectrum , known as the 'Spectrum Easyload' which did the automatic disconnecting of the EAR line when saving programs. Probably (??) work with a ZX80 and ZX81 also... I don't yet know if the circuit has been released on the net yet...
Top

TMAOne wrote: ↑Sat Oct 19, 2013 7:09 pm
Surely we all have .p files of our favorite programs by now, but just in case you've kept that one cassette with your Masters Thesis that you never could quite get to LOAD cleanly, building this little toy might be your ticket.

I just saw this post and would like to build one of these - I have some tapes that may benefit from it!

Any chance you can post a few photos of the inside of yours please? As a newbie to building stuff I find it a lot easier with an actual example to look at for reference.

No problem. I was a newbie to building stuff back then too, as you can no doubt see by my work.

The carbon resistors (and probably the wire wound ones too) were salvages from old TV sets I used to raid for parts. Note that in two cases I couldn't find the right value, and approximated it by substituting two resistors in series.

The trace side is an embarrassment. It was my first, and I think only, attempt at etching a circuit board. Messy business. If I had to do it over again I might use prototyping board and suffer with making all the connections. Then again, there are probably easier ways to get a circuit board made from an image by now--I haven't had occasion to repeat the exercise.

But it works, and has rescued many a tape. Best of luck building yours! 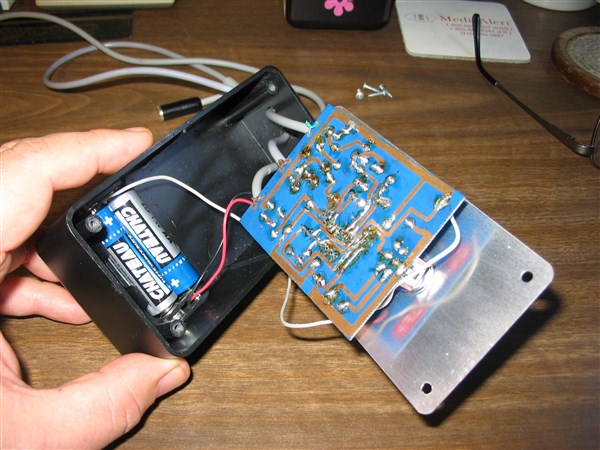 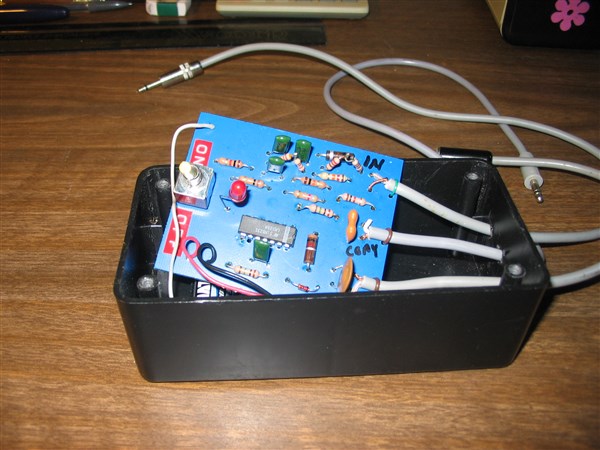 Thanks to you Ian,

i think i will look for some proto board and try to build the box, i save from the dust some of my old tapes and i think it can help reading them on my Zeddy