OK, on my TS1000...
I was going to start with a basic composite mod. Just the 1 transistor 1 resistor one to start.
I opened it up and have been looking around.
It looks nice. (A little too nice. I had some keys also not working when I started it, but the ribbon cable looks nice... Hmmm. Different issue..)

So since I have the US model, there are 3 wires going into the modulator.
I figured I'd see which is ground, which is 5v and which (the one left) is video.

So I grab my little radio shack multimeter, set it for continuity (where it beeps on continuity) and start poking.
Yes, there is no power anywhere around. Not plugged in!

Obviously I haven't done a lot of electronic work..

I assume there is a reason I am getting some continuity no matter where I touch the probes in the TS1000?

Is there a better way for me to validate what is gnd and what is +5v?

On the good side, all of my chips are socketed. Even the 2k RAM chip. Of course, if I decide to go for the 16k internal mod later I will need to replace the socket with a larger one (or add something to extend it).
Top

What cell or cells (battery) does your multimeter use?

Semiconductor junctions may turn on and conduct when the voltage across them is around 0.6V or higher. There are transistors in the modulator. And in the ULA chip.

To carry out continuity testing without the semiconductor junctions messing up the testing, you need a multimeter that has a test voltage of 0.5V or less.

The case of the modulator is soldered to the PCB. This is it’s 0V/GND connection.
There is also a +5V supply wire. A video signal wire. And in the case of USA models, a channel select wire (from the switch on the main PCB).

If you post up a good photo showing the area of the main PCB where the wires go in the modulator, we can tell you which is which.

(And I am posting JUST as I see a reply.. Thanx Mark, that makes sense!!)
Yes, talking to myself.

Ok, I hooked up some power and set the multimeter to 10v (lowest DC voltage setting).

I get basically no voltage (well, the needle did twitch) on the first wire, so that looks to be the video IN feed.
I get 5 volts all the time on the middle wire, so that feels like a solid 5V.
I get 5 volts on the left wire IF the channel switch is flipped.
If I did that right, it appears that there is always voltage to the modulator on the middle wire, and if I flip the channel switch, I also get voltage to the left pin (which I am guessing tells something in the modulator to use the other channel).
I should have know that the modulator worked like that somehow...

GND is obviously on the RF case.

So I will remove all 3 of those wires to the board. Then I think I can solder my transistor directly to the video in to the Base and the +5 to the Collector pins. Then I should be able to hook the Emitter to the resistor and ground it to the case and also send it to the center of the RCA jack.
That's my theory anyway.

FWIW I think the Multimeter uses a single AA or AAA battery inside.
I have a nicer multimeter in the garage. When I find that one, I'll take a look. Makes sense (a bit, I'm just figuring this electronics stuff out..

As far as composite video modifications go, have a look at this thread and the threads that it links to

Thanx!
OK, got the K on my monitor!!!
I did have to turn up the brightness a tad, but I will probably put in a ZX8-CCB later.
This was just a proof of concept.
(and I am trying to decide if I do a ZX8 or the new ULA chip when available, or one of each (I have 2 Zeddies))

Also, I was able to get my keyboard to produce a "1", which was one of the numbers that wasn't working before.
I did it by pressing the number while moving the ribbon cable, so it does look like it's just the ribbon!

I can work on trimming it and fixing it in a bit.

I also ordered a new keyboard and overlay (since I have a US model), but I want to see if just trimming it will get it working first.

My other one (the US ZX81) needs a new power jack also.

And I am considering making the channel switches 50/60 hz switches, 16k internal (for the TS1000 probably), AND replacing the voltage regulators with DC/DC converters.
It's never ending.

I'll take some pics and add them to this thread of my composite work so far (later, have to take the wife out for dinner), and if/when I do the CX8 and/or ULA work.

Trying to include a picture... 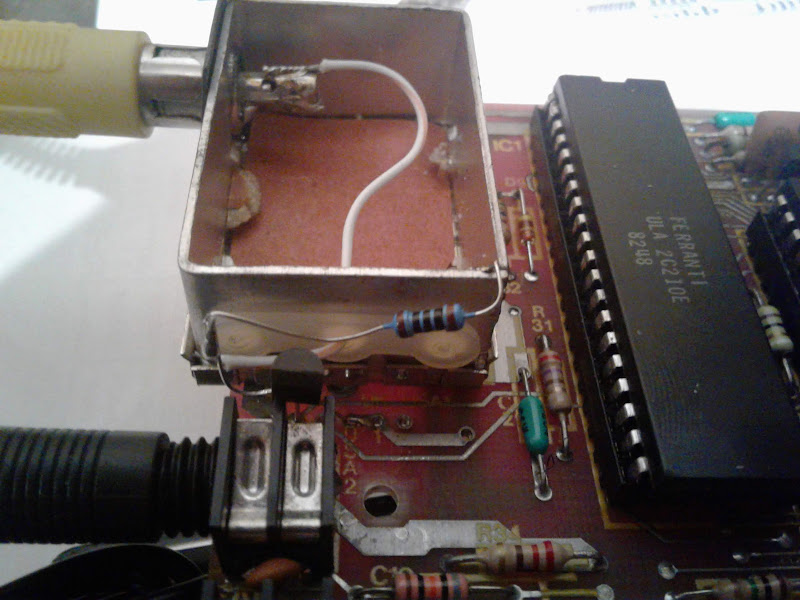 Not the prettiest, but not permanent and works.

OK, got my keyboard working...
Dang working with that flat ribbon is tricky.
Of course, as I carefully pulled it out, one ribbon left some pieces in there... Grrrr...

Took me several tries to get it just right, but it looks happy now and the keys work!
I was able to type my first program...
(Yes, of course it was 10 PRINT "HELLO WORLD" 20 GOTO 10..)

And I forgot to put the top of the RF Modulator case back on when I reassembled...

Oh well, I'll be ordering and putting in a ZX8-CCB before too long anyway.

(Note: My Sinclair 16k Expander didn't work. The TS1000 wouldn't even start with it installed. Not a biggie at this stage.)
Top

Good work on getting your Zeddie working

The Sinclair 16k RAM packs are not very reliable these days. The chips used (4116 type 16k bit DRAM types or equivalents) need three supply voltages (+5V, +12V and -5V). Two of these are generated by a simple DC/DC converter/inverter circuit. The electrolytic capacitors can fail and this will then no longer work. The DRAM chips don’t like it when the -5V bias voltage is missing, and this can cause them to self destruct. And the 4116 DRAM chips are not the most reliable to start with

With any 16k RAM expansion (and most others), the internal RAM chip inside the ZX81 / TS1000 is disabled and not used. So if the RAM expansion has a fault, the computer will end up with no working RAM!

Thanx for the info.
I figure the 16k pack is mostly for the shelf (like my ZX Printer), but I still might poke at it to see if I can get it going at some point. That's way down the line tho.

I theoretically did the 50/60 hz mod using the channel 2/3 switch. (The Tynemouth software mod.)
I don't notice too much difference when I flip the switch, but I haven't done much with it yet.

At least it still works in both directions.

I do think one direction is is a tad darker and possibly the K is a tad lower. But I'll have to do some more testing with that.
I wonder if there is a poke to query 50 or 60? And/or, I heard this thing is faster in 50hz, so maybe just some code that does something, and see if it is faster in one position or the other?

I did also download the HiRes 1K Breakout and that worked great. A tiny bit of warping of the screen, but only at the very top. Very playable.
I still haven't tried it on any other monitors.

All in all, so far so good!

I still have to think about the internal RAM expansion. My 2k chip is socketed, but the socket isn't big enough for the 32k RAM needed for the 16k expansion. I could remove the socket and add the proper one, but I am wondering if I can just add something to extend the existing socket??? The less soldering on the board, the better. (If I can help it. I am still working on my soldering skills (or lack thereof).

Here's my labeled switch.
(Note: I didn't use PAL/NTSC.) 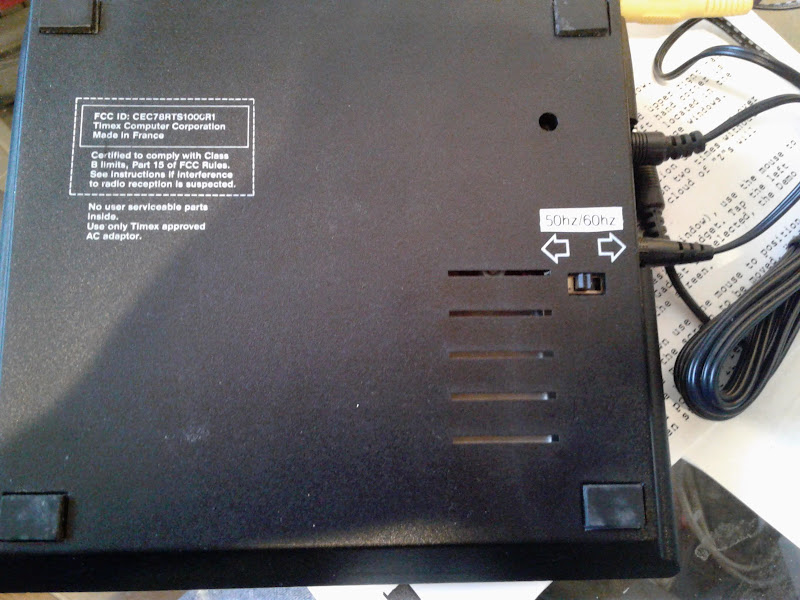