I've had this ZX81 sitting in a box for about 15 years gathering dust and after regaining ym interset in old 8 bit computers after repairing a few other machines I thought I'd give this a go.

There was no PSU with it so I hacked one togethor from a 9V 1A adaptor and a 3.55mm power plug from an even older PSU which I had lost years ago (but still had all the plugs for).

Unfortunately there was no video output at all, no matter how much I tuned the TV, so figuring it was because it just didn't like the LCD TV I cracked it open for some surgery.

First problem was, as you probably guessed, the ribbon cable for the keyboard snapped as I removed the motherboard. I thought I could get away with trimming it back but the 8 pin socket had suffered as well and it wouldn't retain the cable. I put that aside for later as my first goal was to get a display.

Inside was an Issue 3 motherboard and it seemed almost pristine condition. I first attempted the transistor modification on the modulator but again, no signal on the TV. I then replaced the 3 capacitors on the motherboard but again no joy on the video output.

Checking the power supply I could see 4.93V going into the CPU, ULA and memory chips which seemed a little low so I popped a new 7805 regulator in. Now seeing 5.03V but still no video.

Thinking I had c****d up the video mod I splashed out on a ZXVID board and swapped out the contents of the modulator box. Still no video signal

I thn broke out the cheapie oscilloscope I had bought and never used. the clock pin on the ULA showed a wave form but it was nothing like a clock signal. IN fact the same waveform was seen on just about every pin on the board so I concluded the ULA was faulty.

Fortunately I was able to get a replacement with a heatskink attatched so I removed the suspect ULA, put a 40 pin DIL socket on the board and plugged in the new ULA.

WIth fingers crossed I applied power again and..... a grey screen with a black 'K'! Success!

The final step was to replace the broken keyboard connector with a new one and since I was feeling generous I peeled the old keyboard off and stuck on a brand new one.

SO now I can add this to the pile of reconditioned 8 bit computers in the mancave. 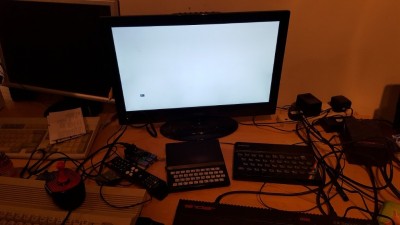 I have been in touch with the original owner of the zeddy. Turns out he lent it to someone who used the worng power supply on it, probalby with a center negative plug, this is probably what blew out the ULA.
Top

Application of the incorrect polarity, or given that it is a 3.5mm jack plug, more likely an AC supply, normally kills the 7805 voltage regulator. Some 78xx voltage regulators then go short circuit input to output, which may then kill other ICs

Electronically lay people “trying”, or accidentally plugging in the incorrect PSU is, and continues to be a problem