Yeah, the ZX81 will try to SAVE regardless of if there is a tape deck connected. It has no way of knowing if the tape is moving or even present.

Unless something strange occurs, SAVE normally ends with 0/0.

Unless something strange occurs, SAVE normally ends with 0/0.

. I saved and loaded back a small PRINT + GOTO routine but I can load it back from the cassette.

Now the point is to know why I cannot load properly any p. file or TZX using a modern SD card based reader

. As it has been said the output signal is very weak. At least I am glad to have the ZX81 fully working

A 0/0 means it was a good load. (zero errors, no lines affected) Did you try to RUN or LIST at that point? Some programs auto-RUN, while others do not.
-Ed
Top

A 0/0 means it was a good load. (zero errors, no lines affected) Did you try to RUN or LIST at that point? Some programs auto-RUN, while others do not.
-Ed

Yes the listing and RUN is good for the couple of basic lines I tried with a standard cassette recorder. I just cannot get any TZX or P file to be loaded with a TZXDuino or directly from the audio output of the sound card (I am using a MAC so this may be probably the reason why it does not work).
Top

I also saw problems using a G4 PPC Mac laptop's headphone out, even with the proper stereo to mono adapter plug or with a custom soldered cable going to a monitor/level meter dongle I built.

If I first ran the Mac's audio into my cassette recorder's MIC input, and ran its output to the Zeddy, I found that would boost the signal enough to get better LOADs.

So I didn't need to have a tape in the machine, I "tricked" the cassette recorder to go into Record mode by pushing in the Record Lockout lever in the left rear of the tape tray. I took the EAR output of the recorder and fed the amplified signal to my TS1000.

You could do the same thing with a blank tape and make a recording at the same time or use the recorder's Pause button. Basically, we're just using the recorder as a booster amp to bring up the Mac's audio to something the Zeddy can digest.

I had a similar problem playing tapes into the Mac to make WAV files. I tried several of my cassette machines, and found one unlikely "walkman-style" copycat that worked in one narrow range of volume level. To "move" something from my Zeddy into the Mac, I'd SAVE the program onto tape with my trusty mono recorder, then play it into the Mac using this Walk-like player. Wierd and kludgy, but it worked to get my few best early creations from hardware into emulation!

A successful LOAD, however short or small, helps verify your setup. And takes less time to see results! Errors on longer programs might also point to other issues, like tape head alignment agreeing with whatever was used on the original tape, deposits on the tape head, old tape and all those other mysteries we Sinclair owners know all too well. 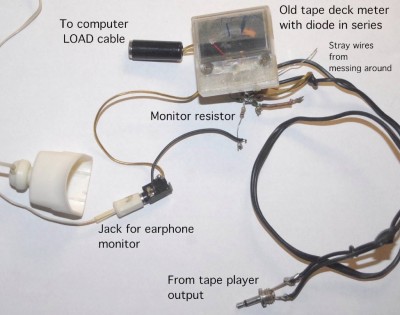 My load meter. A bit of a hack, but it works. Set the playback level so it points to the upper mark on the meter. Glitches show when the needle drops.

Thanks a lot for this tip. I would maybe give it a try although this is quiet a big modification to perform!