After three years I finally decided to release the design files (PCB gerber files etc) of my ZX81 clone ZX81+35 to the world at large.

You can find it, (the third major revision of it) on GitHub here: https://github.com/mahjongg2/ZX81plus35.

I stopped working on it because I wanted to develop a color home computer, I named Rhococo, the prototype of which I finished this spring, and I'm still testing it, and creating the firmware that is needed to make it functional.

But a request if I could release my ZX81+35 design brought me back to work on my ZX-81 clone.
The reason I did not release it three years ago was that I could not get its video output to co-operate with my turbo mode enhancement, it simply did not generate a stable video signal when using turbo mode, (clock speed doubling) and I lost interest in fixing the problem, so I shelved it for later.
I did debug it and designed the PCB for a third version of it though, with all the fixes I found in my second version

But in fact if you don't enable the clock doubling, my ZX81+35 should be a perfectly functional ZX-81 clone. with a digital frontend-port video fix, and improved cassette input circuitry.

I was able to load and run many ZX-81 programs on my ZX81+35 using a laptop sound output as "cassette recorder" with it.
All programs ran well, including various high-res graphics programs.

One thing I never designed for it was a keyboard PCB, my prototype keyboard, based on 6x6mm switches, was built up on a piece of euro-card sized veroboard which I hand wired, partly because the keyboard wiring is so confusing, and hand wiring can be easily fixed.

I have since acquired a real ZX-81, (and a memo tech 64K ram expansion) and using that I can triple check if my keyboard PCB interface wiring is correct.

So I'm now also designing a keyboard PCB compatible with my ZX81+35 (and hopefully also with a real ZX-81, although its PCB is upside down compared to my clone, which has its components, and keyboard connectors on the top side.

More information on my clone can be found here: https://revspace.nl/ZX81PLUS34_ZX81_clone, as well as a ZON compatible sound expansion board here: https://github.com/mahjongg2/PSG-for-ZX ... ZX81-clone
note that I never actually build a prototype of my PSG board, as I knew It would not work with my currently built prototype, (which had an upside down expansion port) so I would have to build a third ZX81+35 prototype first, with the corrections I found when testing my second prototype.

Currently my clone uses discrete CMOS chips for the ULA replacement, which means it is not a beginners project for someone attempting to make one, perhaps I should try to build an ULA replacement, and base a new version on that. I know I'm not the first with that idea, but that doesn't matter to me.
Top

Awesome, I’d been following your excellent work for a while and wondered if this was a project I’d be able to have a go at building. Thanks!
Top

Thanks for sharing the whole project with the public.
Claudius
----------
Top

I have now also created a new assembly drawing, for rev 4.0 and uploaded it to GitHub.
Here you can see how you should populate the PCB: 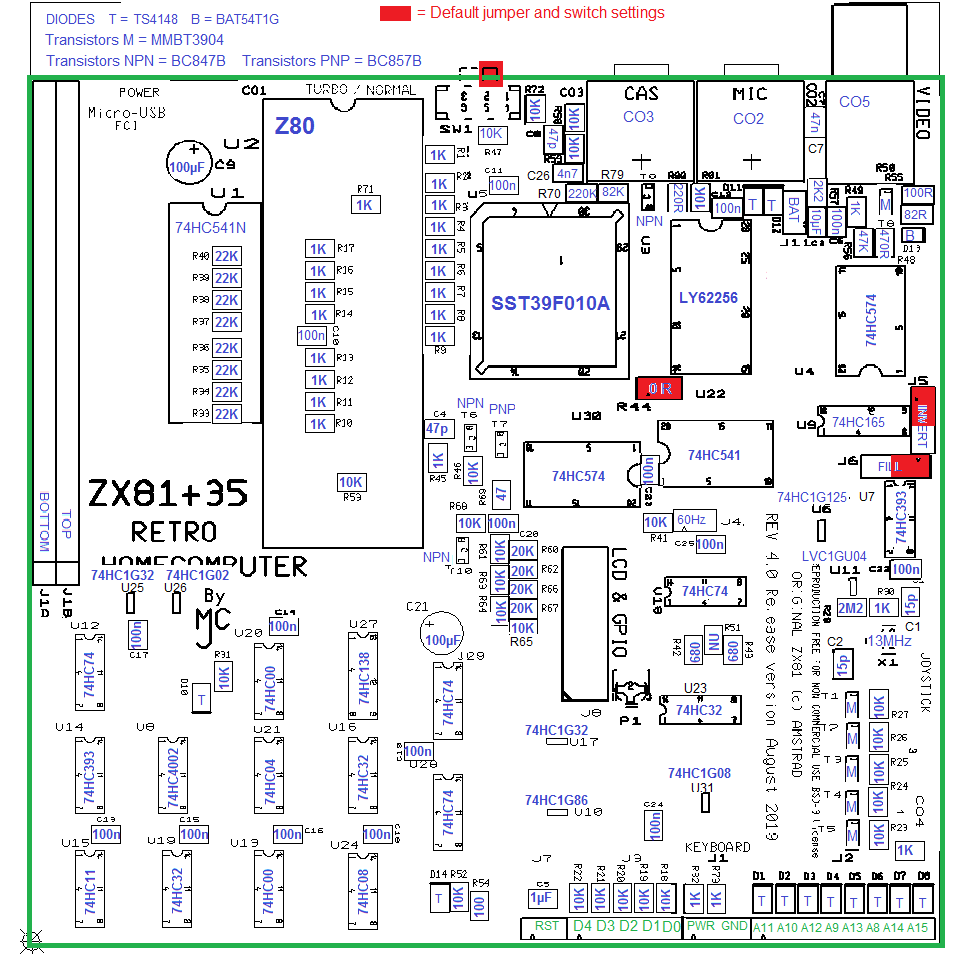 I'm still busy with the keyboard PCB, as not having an error in its wiring is very difficult, due to limited source information, conflicting information (ZX-81 and spectrum interfaces are NOT the same!) and topological challenges (the front side up keyboard connects to the upside down PCB in a real ZX-81).

So I have to triple and quadruple check everything before I'm assured the PCB will be correct.

I'm now reasonably sure the information in green in the above assembly drawing is correct, which means I will have to change the keyboard schematic, as it uses the D0 .. D4 order instead of D4 to D0 order, but after I fix that and check the connections to the matrix again, I can start on the keyboard PCB layout.
Last edited by mahjongg on Tue Sep 03, 2019 12:38 am, edited 1 time in total.
Top

Yes, although the ZX Spectrum matrix looks the same as a ZX81 matrix, they are different.

It helps if you draw it out on paper...

I have made many helpful drawings, the problem is I cannot find any canonical information and have to puzzle it all out myself, and there are pitfalls such as that the ZX-81 keyboard connects to an upside down ZX-81 PCB, and that the canonical schematic does not list the Keyboard address diodes in a logical order, and doesn't mention the interconnect at all. But I think I have gotten it under control now, just have to check and recheck with my loaned ZX-81, and my perfboard keyboard.

This is the schematic that I mostly use (apart from the French video circuitry):

Although to be fair, I don’t remember doing any detailed checking of the keyboard matrix...

Thanks, this is indeed a slightly better version that I have, mine misses all the later addendums, and (as far as I remember) had the keyboard diodes in a random order, I have to check it. Still it doesn't indicate pin-1 of both keyboard connectors, so you have to find out the orientation of this by other means.
The Address lines can be determine by the diode that is connected to it, but the datelines not, and you have to follow the trace to the ULA, as the pullups offer no help.

Thanks for the updated schematic.
Top 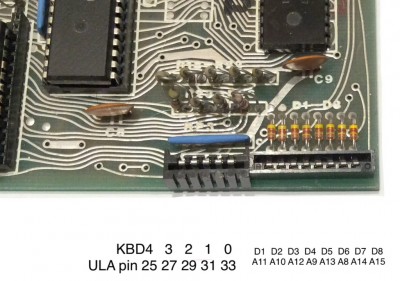 Thanks a lot for the conformation.

I now also truly understand that the keyboard layout is NOT upside down in regards to the main PCB, something that seems to be the case when you open up a ZX-81, and turn over the PCB, it seems the PCB is mounted upside down until you realise its actually mounter to the top half of the case, not the bottom half.

that confused me for a while, but it is now clear. It didn't make sense either, because both the keyboard cable and the two bank cable connectors are on the right, and that can't be the case if one is flipped over relative to the other.
Top
Post Reply
19 posts