dr beep wrote:
Yes, it is his emulator
Yes, it is my othello
Android is (far) future (read info).

Definitely not being rude.
As stated, English is not my native language nor do I see any rudeness in the post.
I always try to help others working with the ZX81.
Top

A thinking aloud post. Aside from the key limitation imposed by Apple guidelines of no external program loading, it was obvious that long term appeal for the app was going to be marred by the virtual keyboard for gamers. The keys are too crowded and/or small depending on the iOS device.

Hence, development focus recently has been a virtual gamepad mode. This consists of an area to simulate a directional joy pad control and up to four large game keys. On selecting the software the gamepad is pre-configured to map to the default keys with an option to redefine. See the screen shots of the work in progress. 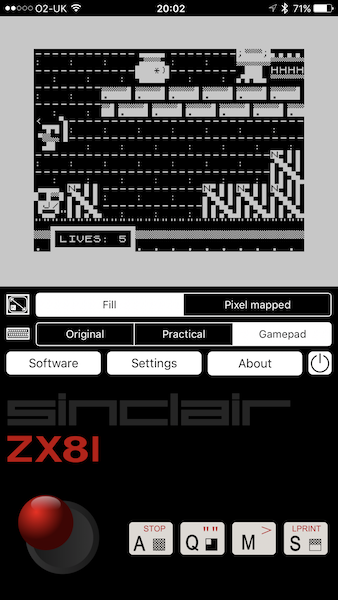 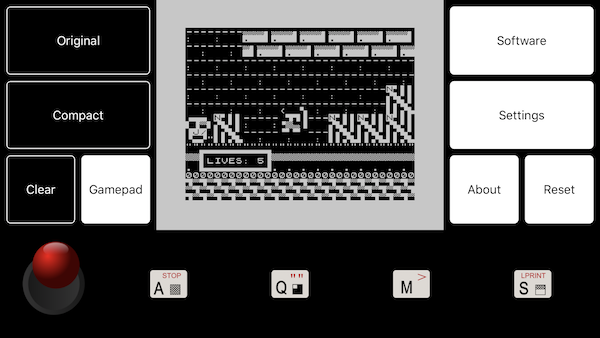 
The directional joystick control is based on a threshold distance from its centre. When a tracked touch exceeds the threshold the mapped direction key state is on. When released the touch joystick gracefully returns to the neutral centre no key press state. Diagonal movements map to the up/down and left/right keys pairs being simultaneously on.

The results weren't quite what was hoped. Particularly true for games that didn't allow two simultaneous key presses to be processed, which lead to a few ideas:
i) A user setting to alternate between the joystick control or the four discrete directional keys in a diamond layout.
ii) A user setting to prioritise allowing one key press to be registered at a given time. Starting in order of preference the non direction keys and then the furthest pressed directional key.
iii) The other possibility was to have a burst mode where directional movement registers a series of key presses as opposed to a single long key press.

Has anyone else had any experience mapping ZX80/81 emulated keys to a virtual gamepad control? Thoughts?

On a brighter note I find it a lot easier to progress on the Mojon Twins' titles using the new controls.

I'll also make time to add ZXpand joystick support for supporting titles. The above needs some polish so it's a couple of weeks away before I have time to refine and submit to Apple.

I like the idea. I think that a lot of games use LASTK to read a key or port.
With multiple keys pressed this will result in a false key, which is your problem.
Unlike the ZX Spectrum that uses the reading of in-ports much more often.

Other option:
4 direction arrows for games that can't use diagonals, like nintendo gamepad or something like that?

Apple have just approved a new version of the app, which has a gamepad mode. It also includes Dr Beep's latest game.
Top

With the newly released version 1.2.5 this now is in place.

I tryed to download it and it said it requires iOS10, that unfortunately I cannot install on my iPad mini...

Is possible to remove that requirement?

Same here, iPad wont install it because its IOS10. Would love to get this on mine.
Top

It's 64 bit only so better forget about it.
I ditched my ios devices because I don't agree to apple's update policy any more.
I'm now on Android devices.
In theory, there is no difference between theory and practice. But, in practice, there is.
Top

It’s 64bit only not directly because of a policy of Apple. The app uses the Metal Framework, which is 64bit only. It could be reworked to run on 32bit devices but I prefer to split my time with my newborn son, wife, job commitments and then new emulator functionality in that order. Basically blame me not Apple.

With the exception of the iPhone 5c, all iOS new models released from 2013 onwards are compatible. Don’t look at this from the mindset of a Windows XP user and expect things to keep ticking over when the tech/platform is driven by smartphones, which are typically replaced when a two year mobile phone contact is up for renewal.

Be more frustrated with not being able to load non embedded programs in the app due to an Apple policy. That’s something with which I sympathise more as at least one users has then described my efforts as not being a real emulator.

Regarding Android versus Apple, at least iOS devices get OS version updates for 4 to 5 years. Few Android devices get past two years in that respect. I’m certainly not anti Android and we have both platforms in our household.

The only thing that irks me is not being able to run 32bit apps in iOS 11. The developers are also to blame in not migrating their apps to a new version of Xcode and enabling a few compiler options for a universal 32/64bit build. They’ve had ample opportunities since 2013.

I’m currently working on an NTSC mode setting and a couple of related tweaks like changes to the virtual keyboard to be representative of the TS1000. I’m trying to release new versions every 4 to 6 weeks.
Top

Hi,
Is there a way to have an option where the virtual joystick activates in 'single push' mode. In other words, and as an example, if you push the virtual joystick left, and continue to hold it left, can it just be register as a single keystroke (on then off), as opposed to being seen as still having the key held down. Games like Chopperdrop act on single keypresses where only one key can be pressed at any one time. So presently when the joystick is pushed left and held there, you can't fire. Not fun.

Would be a great option.