Hi, I've posted a few times but never did an intro post.

I started playing with 8-bit computers in elementary school (Coco 1 and then Apple II) and when the TS1000 hit $50 at Kmart, I finally got my own computer. The 16k pack was another $50 so that had to wait. I learned some BASIC and kept myself entertained with the kind of dumb programs a pre-teen would write. I had a couple of books that kept me going.

Later my dad picked up a TI-99/4a when IT got blown out at Kmart for $50, so he learned some programming and we booked a bit over that. Next was an IBM PCjr found at a tent sale for $100 new in box. That was about 20% of the going rate at the time so it was a major score. Learned a different kind of BASIC but mainly just played around with it. The user manuals were excellent.

In my teens I saved my pennies and traded stuff and went through an Atari 520STfm, Amiga 500, Tandy 1000EX, XT frankenclone, Atari 800XL, Atari 130XE, and others. I started learning C and Pascal. I entered college with the A500 and left with a 486 clone running Slackware Linux and a solid education in computer science. The rest is even more boring to this audience.

Assuming you're still reading, a couple of years ago I found and digitized my old TS1000 tapes, converted to P files, and ran my old dumb first programs on an emulator. I started lurking in the community on and off then a few months ago I decided to jump back in. After some rehab, my original TS1000 is now fully functional UNTIL the ULA overheats after about 10 minutes of usage. I bought another unit off eBay and it's now fully functional with a ZXpand+, composite mod, and tactile keyboard.

Now that I have been edumacated in computer organization and (non-Z80) assembly programming, I'm slowly figuring out what was under the hood of the ZX81 all along that I couldn't even begin to comprehend as an 9-year-old BASIC coder. It's a neat way to spend time when I have it!

Here's another gratuitous picture. I painted the monitor black to match the black and silver theme. 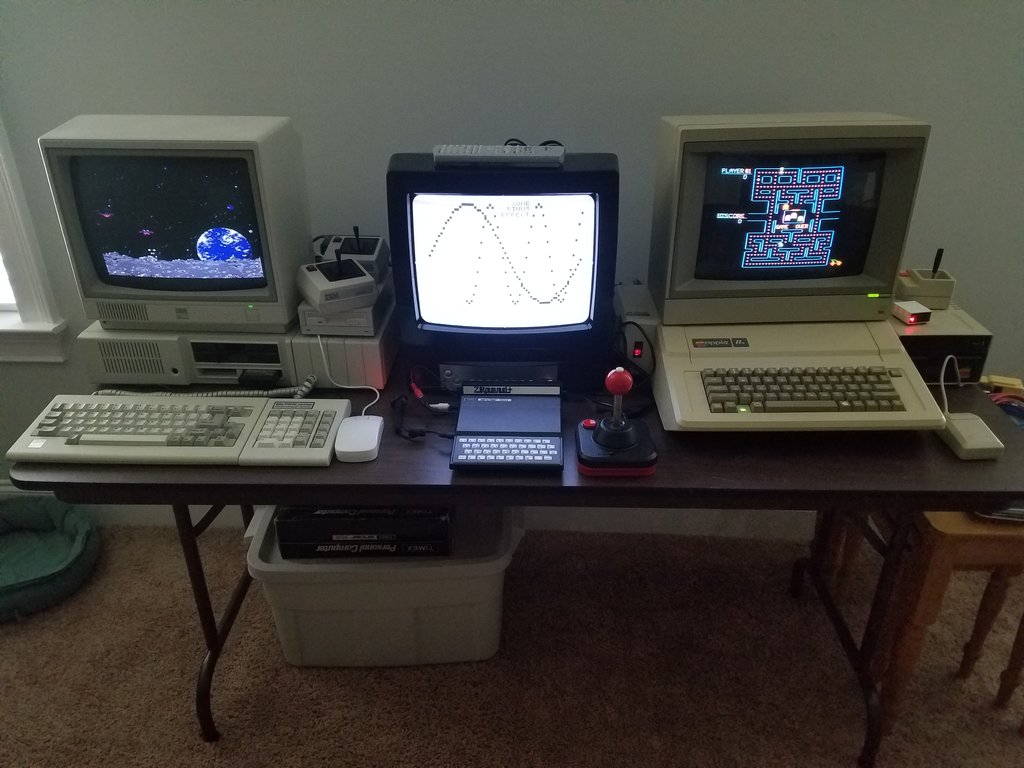 Way more organized than my computer dungeon in Texas

Lovely intro - thanks! Also envious of your tidiness

Yup! Kind of funny using an out-of-country server to facilitate an in-state purchase, but it did the job!
Top

OMG so neat! Come and organize my basement please? Everything I touch is an avalanche of crap everywhere.

Im digging out my closets to find memories of the early ZX days as well as my PC adventures. Gotta say the archeological digs have been paying off.
The more you say the less people hear.
Top
Post Reply
6 posts • Page 1 of 1