Jamie Bradbury's been busy again: his second entry is Blind Snake Moan for the 48K Spectrum, the name of which now makes sense since someone on WOS explained it.

Better still, though, is that the QL has joined the party, courtesy of "Mr QL" himself, Dilwyn Jones. Don't Shoot the QL, he tells us! Though if your ZX81 or ZX80 is playing up, you are entirely welcome to shoot that, for "some" points.

So, when are the two machines tied to this forum going to get some action? It can't entirely be up to me to keep on cracking the whip...
Spectribution: Dr. Jim's Sinclair computing pages.
Features my own programs, modified type-ins, RZXs, character sets & UDGs, and QL type-ins... so far!
Top

I've been busy this week! First there was Darío Ruellan's Shower Simulator, in which you can boil yourself alive like a lobster. HHUUUAAYY!

Then there was Rob Edwards' 2D Deathchase, in which you can crash a motorbike into a tree, just not at night.

Now, sound the trumpets - because here's a first for the CSSCGC in 25 years: multiple QL entries! 72-year-old Steve Poole might also be the oldest entrant to the competition ever, though that's not something I can check easily. His game is entirely based in text mode (that should go down well here!), though with four or eight colour graphics (only three at a time are ever used at most, mind!) and it's called... Invaders - no more than that.


Meanwhile, ZX81 fans, it can't have escaped your attention that its 40th birthday is ONE WEEK AWAY. Can I just stick with verbal badgering or do I need to get a big stick out and start waving it menacingly?
Spectribution: Dr. Jim's Sinclair computing pages.
Features my own programs, modified type-ins, RZXs, character sets & UDGs, and QL type-ins... so far!
Top

Hopefully, in the next two hours, I will be sending an entry to celebrate the ZX81’s 40th birthday

There were no submissions this week, until about 40 minutes ago - which was the game that 1204MAK promised in the post above. That means that there will be a review coming either very late this evening, or (more likely) some time tomorrow, but it's too late to make the weekly round-up. One thing is for sure, though, the ZX81 has stopped being emo, and I have some further great hopes for this year's competition.

Operation Fly By Night (i.e. my house move project) is now into its final descent, and the good news is I've sorted out an internet connection for the relocated CSSCGC Towers, for one day after I move in. I'll be surrounded by utter chaos until at least the end of May, probably later, but sending me more Crap Games will give me something useful to do while I'm waiting for coats of paint to dry in the bedroom and the lounge.
Spectribution: Dr. Jim's Sinclair computing pages.
Features my own programs, modified type-ins, RZXs, character sets & UDGs, and QL type-ins... so far!
Top

I said I would publicise any ZX81 and ZX80 games here in full the way I do on the other forums when they arrive. And finally, on the right day, one has!

So cheers to 1024MAK for answering the call. Presenting, something that not only celebrates the ZX81 blowing out 40 candles on its birthday cake, but also enters the Yellow Challenge (properly)! Excellent timing, that, because I was watching the TV series the other day, which is also 40 years old this year. 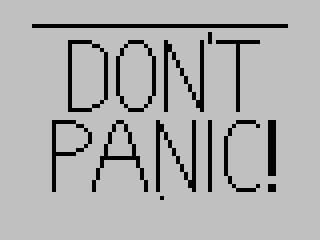 Double figures on the weekly reports. Operation Fly By Night (Away From Here) is getting a bit fraught, but if I said I was grateful not to have received any entries since last Saturday, I'd be half-lying at least because I want them to keep coming in. I already have the promise of something I've seen a brief preview of.

As you see above, 1024MAK rescued the ZX81's 40th birthday from going completely emo with Don't Panic almost exactly a week ago (i.e. just after I'd posted the weekly round-up). And then, Jamie Bradbury gave us ZX Chuntey Inspector, about which I'm already having nightmares of a follow-up. "ZX Chuntey Inspector 2: Electric Boogaloo". Let's hope that one works, at least...

Nobody has made any attempt at the Cyan Challenge yet. I'm almost thinking it was a waste of a challenge slot, even though it'll be mildly amusing if I do get one, for a minute or so. ZX81 and ZX80 entries can also count for this challenge - and I'll be extra-impressed at anyone who can stop a game with error E without resorting to a POKE...
Spectribution: Dr. Jim's Sinclair computing pages.
Features my own programs, modified type-ins, RZXs, character sets & UDGs, and QL type-ins... so far!
Top

Just the one submission this week - Paul E. Collins' Balloonatix for the 48K Spectrum. As Crap Games go, that was a good one, despite the urge I had to throw all my computing equipment across the room into a pile of smashed circuit boards when I encountered the tremendously evil stage 7.

I would say "cheers for holding off on sending more Crap Games", because a fair chunk of this week has involved moving vast chunks of my worldly possessions - three Really Useful Boxes of Spectrum equipment included - into a storage unit. This time next week, the house will be stripped bare, and this time in two weeks, I'll be in another part of the country. So, reviews may not appear instantly in this interim period, but I will endeavour to get them out as soon as possible.
Spectribution: Dr. Jim's Sinclair computing pages.
Features my own programs, modified type-ins, RZXs, character sets & UDGs, and QL type-ins... so far!
Top

Hva i helvete? It's been a blank week. And it's been a blank almost-two-weeks, seeing as the last submission was a day after the week 10 round-up. I've had promises, but these are yet to be fulfilled...

The week 13 round up will come from a different part of the country - CSSCGC Towers relocates in three days. I'll make sure I've got the computer up and running before I do anything else, but I might be scarce until then. If you have something to send, do so and I'll review it when I get a chance.
Spectribution: Dr. Jim's Sinclair computing pages.
Features my own programs, modified type-ins, RZXs, character sets & UDGs, and QL type-ins... so far!
Top

It's the first report from the Marshlands... and it's not good news, in that I haven't had a chance to review the one entry I've found this week. I say "found", because I only came across it when the Evil Google Empire forced me to log into my email through the web portal instead of Thunderbird. The game is for the ZX81, and was a birthday entry - it's been languishing in the spam folder since 5th March!

I made a post explaining this on the other forums, with the intention of reviewing it today and putting out the big reveal here as well, seeing as it's for one of the relevant machines that this forum is interested in. Only thing is, landing in the new house wasn't the end of the move - there was a lot more stuff to recover and I've only just finished that today. Hence, I couldn't give the entry the attention I would usually do, and rather than rushing the review and doing a half-arsed job, I'll give it my full attention tomorrow, and it'll form part of the Week 14 round-up.
Spectribution: Dr. Jim's Sinclair computing pages.
Features my own programs, modified type-ins, RZXs, character sets & UDGs, and QL type-ins... so far!
Top

Exciting news! After an unexpected three weeks of downtime, the CSSCGC surges back into life with two new entries for the ZX81! And because they're for one of the machines that this forum is interested in, it's only right that I post the reviews here as soon as possible 9as I'd do with QL stuff on their forum). Rejoice, celebrate, open a bottle of your favourite beer...

The first game is MotoRace81, by Colin Williams. This is the game that Google's mail service attempted to eat for dinner (see above), but I rescued it with really not very long to spare. I do not want to let this happen again, so if it looks like I'm being slack with responding to your entries (even if I'm actually not), rattle my cage about it. 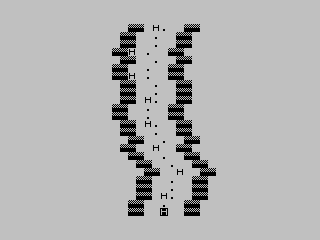 Meanwhile, turning up in my inbox just after midnight and not intercepted by the Evil Empire's spam trap is Salvador Camacho's Camel Racing. It's a shorter review than most of those I've written, but it's a shorter game so don't think for a minute you're being short-changed. (And it's one of the few where I might actually have stuck to a 500 word limit, but I can never get my point across in so few words.) 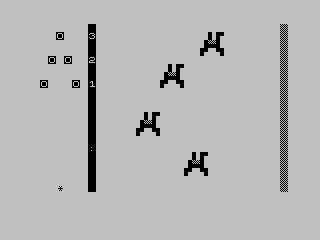