Remake of an ancient board game

Good, I'm a bit ashamed for the latest quick'n'dirty attempt, I really hope I fixed everything now.
I suspect some of the internal game logic was "just working" in the earlier versions.
Funny but possibly improved later, in the ZX81 version in 1983. BTW I hope that the visual part is now good, though.

As said already, to run it 32K are required.

Just tried this latest version and now the graphics are all working and the seismic survey feature now usable.

The game logic seems to act like the original so all good there. The only "glitch" I could see is that sometimes when when drilling, instead of a report like "Limestone " or "cap rock" found, the entry is blank but apart from that all seems ok.

I especially like the fact it doesn't take all day to set up the geo-graphics at the beginning like the original ZX81 version does and the hi-res is quite nice too.

An excellent version of this simulation in my opinion so well done Stefano.

I'm so glad you like it!
I noticed the glitch, it can be easily solved by setting a default comment, but I tried to faithfully rebuild the sequential code of the original program, thus it simply shouldn't happen

An original oddity of the game is related to the possibility to pay small activities even when your cash gets negative. you can't invest on a Rafinery or pipes, but you can still drill, etc.
The zx spectrum had sound and colours, I'll try.
The geological structure build phase includes a pause, to make the text readable

In general a little more speed can be gathered, e.g. by optimizing the lower display area cleanup, but making the player suffer a little adds the same thrill of those unexpected events where thing happen preventing any kind of action in the meanwhile

Moggy, I compared the code with the zx81 version. The new edition in 1983 was better, it featured few more good ideas, like unexpected trouble while drilling or building the production facility, which (if I read the code correctly) , could also succeed but with extra costs.
The drill phase seems to be able to occasionally revert to a previous stage too.
I'm not adding those extra features at the moment but I could spot the bug sometimes hiding the messages related to the "core sample".
I'm also trying to pick the existing French translation and add a fourth language option

The probability balance looks very close but is different on the zx81 (at least the 1983 version).

My conversion is in C, thus quite portable. I ported it to the Commodore 128 (z80, udg, no graphics but sound and colours) .. it's kinda nice!
Top

I look forward to what ever you decide to do with this Stefano as it is a nice simulation and you have made an excellent version.

fyi, I succeeded in porting it to the Sharp MZ 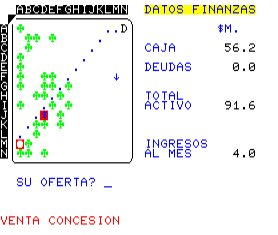 Updated version. I'm not sure it is the final one, I never got a dry well in my tests ! It can be a bug

The original BASIC program was "obfuscated" in several ways, some are simply bugs, probably consequent of the obfuscation mess

Other are clever tricks permitting also to save memory, some are dead ends.. I suspect the programmer had initially the intention to have a smart opponent, there is a couple of vectors with a 2 values DIMension, always used only in the first position (as simple variables)..


..should someone like to have it built for other configurations, (text only, other graphics cards..) just ask.
There is also space for Chroma81 or sound.
Last edited by stefano on Thu Jun 24, 2021 10:58 am, edited 2 times in total.
Top

Thanks Stefano will test and report back.
Top

Only thing to report is that when you do win or lose the report after the game ends needs a longer pause to give you time to read it.
Top

thank you for testing, I'll put longer pauses at the game end. The last page was supposed to stay even if the game jumped back to BASIC making the text mode visible only when SPACE was pressed, but I may have used the wrong compile flags. would you mind to take a picture, in the future? I loved them.
Top
Post Reply
24 posts